Cops team up to shop 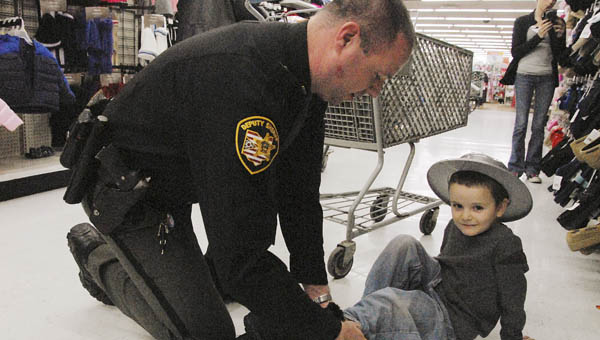 Detective Jason B. Newman, with the Lawrence County Sheriff’s Office, helps Isaiah Strunk, 5, find a pair of boots during the annual Shop with a Cop event Tuesday at Walmart.

SOUTH POINT — Bailey Hackworth knew exactly what she wanted while she walked through Walmart Tuesday night with Carol Kitts of the Lawrence County Sheriff’s office.

The two wandered down the aisles of the toy department, picking out a pink dress-up gown and play makeup, before heading to the clothing department for socks.

“I’ve always wanted to do this,” Kitts said. “I’ve always thought it was neat because shopping’s my thing.”

And for a while that evening, several law enforcement officers made shopping their thing during Shop with a Cop at the South Point Walmart.

The program pairs children with a law enforcement officer, who shops with them for clothes and toys.

Both the Ohio State Highway Patrol and the Lawrence County Sheriff’s office participated in Shop with a Cop. In the past, only the patrol participated. This year the patrol invited other local law enforcement agencies to join.

“It was kind of a last-minute thing so only the sheriff’s office could do it,” Trooper Ryan Robirds of the patrol, said. He added that next year the patrol hopes to include other village and city law enforcement agencies.

Each law enforcement agency collects money from the officers to fund the program. While the agencies are not allowed to solicit for the money, some of the funds were donated, Robirds said. This year $1,300 was raised.

Besides helping families who are in need, the program also aims at teaching children that they should not be afraid of law enforcement, Robirds said. Many of the children come from families who have had negative dealings with the law, he said.

“It shows them that we’re not all bad,” Robirds said.

Each year a different school district is selected for the program. This year Rock Hill was chosen.

Michele Dickess, director of the Rock Hill preschool and her staff chose the children. She said she appreciates the program and the fact that it teaches children to interact positively with police officers.

“I just cannot express how awesome this is, how wonderful it is,” Dickess said. “I think it’s just a fantastic program. I’m in awe at how kind people are.”

“This is a wonderful thing,” she said. “I just feel privileged that mine in their time of need are able to do it.”

Set 2011 organizational meeting for Jan. 10 It won’t be until after the New Year before the Lawrence County Commissioners... read more