Volunteers come out to help those in need 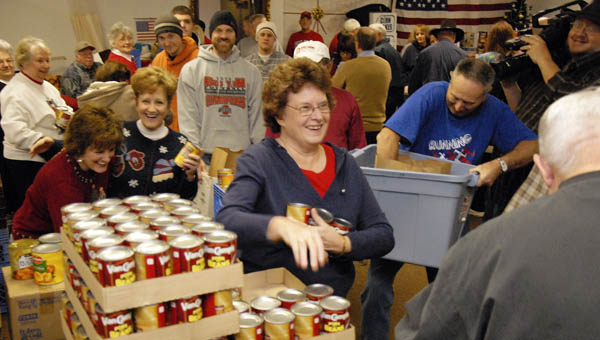 Volunteers gathered at the City Welfare Mission Wednesday morning spending the day making food baskets to be handed out during their annual giveaway. THE TRIBUNE/JESSICA ST JAMES

Thanks to the generosity of the community and the Ironton City Welfare Mission, hundreds of Lawrence County families will be able to have a hearty Christmas dinner.

Today, the mission distributed almost 650 food baskets to Lawrence County families in its annual giveaway. Jeff Cremeans, pastor and director of the mission, said about $20-$30,000 of food was collected to fill the baskets.

He also said he was surprised that there weren’t as many people to sign up for the giveaway this year.

“I don’t understand that but we didn’t have as many come back this year as they did last year,” he said “I don’t see the economy any better, but it could be that they found somewhere else to go, or possibly could have just moved off to find employment. That would be my best guess.”

Even still, about 100 or so volunteers came out on Wednesday to help fill all the baskets. Cremeans said that even though the food would go to Lawrence County families, people from all over the area came to help.

“It’s wonderful, just to see the people giving back,” Cremeans said. “That’s what it’s all about.”

The volunteers snaked around the inside of the mission and formed an assembly line to fill the baskets. Each person carried a box and followed the line around to each station, where another volunteer placed a food item in the box.

Six-year-old Cameron Brown carried his own box by himself to each station.

When asked if he liked helping with the food giveaway he said, “Yeah, but it’s heavy!” He also said that he felt good to help people get food.

Cameron’s mother, Brenda, said this is the first year they have helped with the mission’s giveaway. They came from Ashland, Ky. to help fill the baskets.

“I’ve known they’ve done the baskets for a while and just wanted to do something this year,” Brenda said. She also said she wanted Cameron to start learning how to help others.

Kathy Burton was on the other side of the assembly line, handing out cans of beans for the baskets.

Burton came with a group from Rubyville Community Church in Portsmouth.

Burton said she couldn’t put into words how it made her feel to help with the project.

“God’s blessed me and my husband so much,” she said as she began to tear up. “When we were younger and he was in the Air Force, we had hard times. So I can relate. But God always took care of us even then.”

Burton said this was her way of giving back for all that she had gotten.

“This is what Christmas is about, it really is,” she said.

Along with the food giveaway, the children of the qualifying families got brand new toys.

Cremeans said more than 1,000 children would get toys.

“It’s just great to know that all those toys are going out and the kids are going to be happy,” he said. “We’re glad to be able to do that.”

Cremeans said the toys are unwrapped so the parents will be able to personalize the wrapping for their children.

Cremeans also said he would like to thank the volunteers from Rubyville Community Church, Campbell Chapel Free Will Baptist Church and all the other people from Lawrence County and the area who came to help fill the baskets.

“Thank you to everybody who helps and gives. We couldn’t do it without their support.”