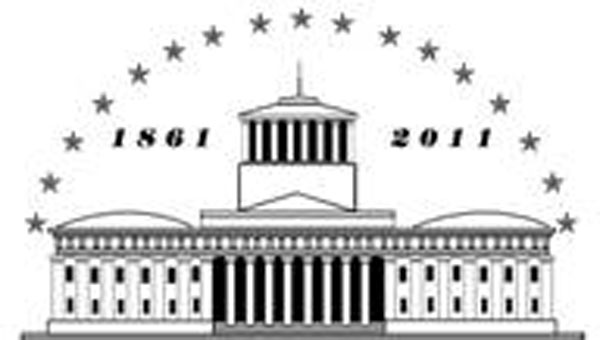 COLUMBUS — The people of Ohio will celebrate the sesquicentennial of the Ohio Statehouse throughout 2011.

The Ohio Statehouse has served as the heart of Ohio democracy for the past 150 years. Throughout the state, the Ohio Statehouse stands as a symbol of the legislative and executive branches of state government, and the people of Ohio.

The Statehouse is considered to be one of the most significant architectural accomplishments of the early republic.

Its Greek Revival Doric architectural details and proportions give the impression of permanence, elegance and grandeur deserved by the original State Legislature who passed a law on Jan. 26, 1838 to build the new statehouse. Restored to its 1861 appearance, the Ohio Statehouse maintains its historic character as it continues to function as the center of state government in Ohio.

Scheduled events and educational opportunities include:

Red, white and blue patriotic bunting will adorn the west columns of the Ohio Statehouse throughout 2011. The bunting will draw attention to the significance of the Statehouse’s year-long sesquicentennial celebration.

The 150th anniversary of the Ohio Statehouse is an opportunity for students K-12 to demonstrate their creativity by participating in the celebration. Students across Ohio have the opportunity to create a work of art based on the theme, “Picture Yourself at the People’s House.” Every work of art will be highlighted online at www.OhioStatehouse.org, and a rotating exhibit will feature a variety of submissions each month throughout the year-long celebration. Detailed information is available at www.OhioStatehouse.org.

Individuals of all ages are invited to attend the Grande Winter Ball hosted by Civil War re-enactors, 1st Ohio Light Artillery, Battery A. Come dance or watch. Learn how to reel or waltz. Dress in attire of the Civil War period or come as you are. This event highlights the time period in which the Statehouse was first constructed.

The event is free; due to limited space an online registration is required at www.ohiostatehouse.org.

The Ohio Statehouse will celebrate Black History Month throughout February with a special display, free historical performances each Tuesday at noon and special tours of the George Washington Williams Room. Visitors can also enjoy a special soul food menu at the Capitol Cafe each Wednesday in February.

Wheelersburg —Frontier customers in the Wheelersburg area have experienced four separate telephone service disruptions during the past few weeks due... read more