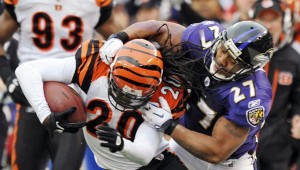 BALTIMORE — The Baltimore Ravens were already in the playoffs, so their focus on the final day of the regular season was to gain momentum and hope for a little luck.

They took care of the first part — albeit shakily — and got no help with the second part.

Ed Reed had two interceptions and Ray Lewis recovered two fumbles, part of an opportunistic defense that carried the Ravens over the Cincinnati Bengals 13-7 Sunday.

Despite the victory, the Ravens (12-4) failed to get the help necessary to win the AFC North. Baltimore needed Pittsburgh to lose to Cleveland, but the Steelers won 41-9 to make the Ravens a wild-card entrant.

“We came in and took care of business, which was to go from 11 to 12,” Lewis said. “That’s the most important thing, for us to get that 12th victory. I just think it’s huge.”

Baltimore will enter the playoffs with a four-game winning streak, but they face the prospect of playing all their games on the road — just like in the previous two years.

The journey begins Sunday in Kansas City against the AFC West champs. Baltimore won its only Super Bowl, after the 2000 season, as a wild-card team.

Ray Rice scored on a 7-yard run and Billy Cundiff kicked two field goals for the Ravens, who gave up 395 yards but forced five turnovers. Baltimore had lost three straight to Cincinnati — including a 15-10 decision in Week 2 that proved decisive in the tiebreaking system that enabled Pittsburgh to win the division.

Sunday’s victory was not assured until Bengals quarterback Carson Palmer threw an incompletion on a fourth-down play from the Baltimore 2 with 10 seconds left. That ended Cincinnati’s modest two-game winning streak and dropped the Bengals to 4-12.

“It was a game that we had a chance and didn’t finish it,” Palmer said. “We feel awful because we had the chance to go into the offseason with a pleasant feeling at least. But just didn’t make the plays we needed to all game.”

Palmer went 32 for 45 for 305 yards but was intercepted twice and lost a fumble. Jerome Simpson caught 12 passes for 123 yards and a score for the Bengals, who were without injured receivers Terrell Owens and Chad Ochocinco.

The defending AFC North champions endured a 10-game losing streak and went 1-7 on the road. After an eight-year run in which he’s had only two winning seasons, Cincinnati coach Marvin Lewis will discuss his status on Monday with owner Mike Brown.

After being held to a pair of field goals in the first half, Baltimore went up 13-0 on Rice’s TD run with 5:47 left in the third quarter.

The Bengals then mounted an 80-yard drive that included an encroachment call against Ravens tackle Kelly Gregg on a fourth-and-1 from the Baltimore 40. That led to an 11-yard touchdown pass from Palmer to Simpson with 12:24 remaining.

Cincinnati got the ball back and moved to the Baltimore 26, where Cedric Peerman was stuffed for no gain on a fourth-and-1 with 5:30 left.

The Bengals’ next chance came minutes later, and typical of Cincinnati’s season, the drive ended when Palmer fumbled at the Baltimore 29 after scrambling for a first down immediately after the two-minute warning.

“I just didn’t do a good job securing the ball,” Palmer said.

Reed’s second consecutive two-interception game gave him eight picks for the season — in only 10 games. His two returns totaled 48 yards, lifting him past Darren Sharper for second place on the NFL career list with 1,438. Rod Woodson is the record-holder with 1,483.

“When you’re playing against Ed Reed, you have to be aware of his presence at all times,” Palmer said. “You can’t have five turnovers and expect to win.”

Reed’s first interception ended Cincinnati’s first possession, and the Ravens used a 37-yard pass from Joe Flacco to tight end Todd Heap to set up a 25-yard field goal for a 3-0 lead.

Baltimore never gave up the advantage.

“We wanted to go out of this game with a win and go in to the playoffs with momentum,” said receiver Derrick Mason, who acknowledged that the Ravens must play better to advance deep into the postseason.

“We can’t allow ourselves to go into next week … and play the way that we played today,” he said. “We’ve got to go in there and click on all cylinders.”

Notes: Mason joined Jerry Rice and Tony Gonzalez as the only players in NFL history with 60-plus receptions in 11 straight seasons. … Marvin Lewis is 10-6 against Baltimore. … Ravens CB Josh Wilson and LB Dannell Ellerbe both left in the first half with shoulder injuries. … Referee Pete Morelli twice referred to the Bengals as “Cleveland” over the microphone.

The Associated Press CLEVELAND — There are steps, some big, some small, teams must take before they can be Super... read more