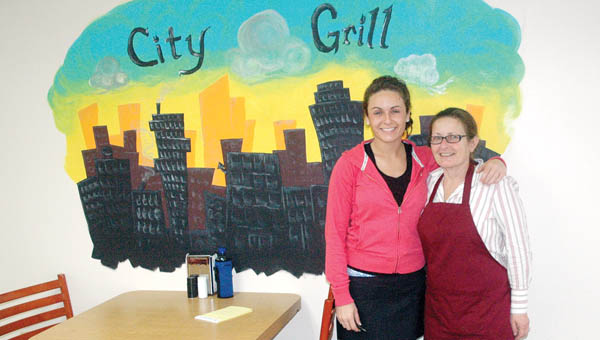 Debbie and Kristy Bragg pose in front of the artwork in their recently opened restaurant, City Grill.

A new year means a new business for the Ironton City Center.

The restaurant, which is owned and operated by Gene and Debora Bragg and their daughter, Kristy, is in the space where Suzy Q’s Café was located before it closed late last year.

The new restaurant serves lunches including hamburger and hotdogs, sandwiches, chicken strips as well as chili, soup and salad.

The Braggs owned another restaurant/gas station that went by their name and was located at Third and Vine streets in Ironton. The family closed Bragg’s about a year ago.

“We took a year off and decided we wanted to come back and like magic this place came open,” Debbie Bragg said.

The family owned Bragg’s for 12 years before selling it.

“I think we just got burnt out on it for awhile,” Bragg said. “We did it as a husband and wife, as a family. We’ve been lazy for a year and we needed to get up and start up again.

“People were always good to us in Ironton.”

Bragg said she picked the city center because she knows the downtown area needs more businesses.

“It seemed like a good thing to do,” she said.

On the first day of operation, Bragg said the restaurant had plenty of traffic Monday.

Ironton Mayor Rich Blankenship said he hopes the restaurant will mean more traffic in the city center. The Braggs’ previous restaurant had a large following, he said.

“We’re hoping that will translate from the old location to here,” Blankenship said.

City Grill is located in the Ironton City Center at 301 S. Third St.

For those high school students who are looking for a place to let their artwork shine, Ohio University Southern has... read more