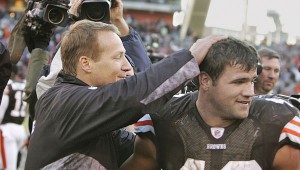 Eric Mangini, left, pats running back Peyton Hillis on the head after the Cleveland Browns routed the New England Patriots 34-14 earlier this season. Mangini didn’t have enough wins as the Browns went 5-11 for the second straight year and he was fired Monday as the head coach. (MCT DIRECT PHOTO)

One day after another lost season, the search was underway in Cleveland for a new coach, the one as Holmgren put it, “can eventually someday lead us to the championship. That is my only goal.”

Attention Jon Gruden, John Fox, Jim Harbaugh, Marty Mornhinweg, Brad Childress and others: Holmgren may have you on his list.

For now, though, Holmgren doesn’t have his own name on it. But that could change.

Granted a second season by Holmgren, Mangini was fired on Monday, dismissed less than two years after being hired by owner Randy Lerner, who was convinced he had found the next Bill Belichick. The Browns went 5-11 for the second straight season, and although they showed some significant progress under Mangini, it wasn’t enough.

During a morning meeting, only hours after an embarrassing 41-9 home loss to Pittsburgh, Holmgren thanked Mangini for his efforts. Then, he told him his time was up.

At 10:04 a.m., the Browns released a statement announcing the coaching change. By 11 a.m., Holmgren was sending request forms to NFL teams asking permission to speak with their coaches. Holmgren did not reveal names of any potential candidates.

His search will not not be limited to those with pro experience or ones favoring a West Coast offense. And, he doesn’t have a timetable to name Cleveland’s fifth coach since 1999. Money, he said, is no object.

Only weeks ago, Holmgren hinted about a return to coaching. He hasn’t ruled it out, but the 62-year-old with three Super Bowl visits on a sparkling 17-year Hall-of-Fame-worthy resume, insists he’s enjoying his executive role. Still, the bug hasn’t completely left, and Holmgren may coach again.

“I’ll always be a coach,” he said. “Heck, people in the building call me coach. To tell you right now that I would never coach again, whether it’s here or any place, that probably wouldn’t be honest. As of right now, I am the president of the Cleveland Browns and my job is to find the best coach available, the right coach for this job. That’s what I am trying to do and that does not include me right now.

“I probably won’t coach again, but I don’t want to lie to you — ever.”

Holmgren has not yet spoken with Fox, whose contract was not renewed in Carolina, or Gruden, the former Tampa Bay coach and ESPN analyst who worked under Holmgren in San Francisco and Green Bay. Mornhinweg, Philadelphia’s offensive coordinator, is also from the Holmgren coaching tree and a close friend. All are probable targets.

Interestingly, Holmgren, Fox, Gruden and Mornhinweg are all represented by the same agent, Bob LaMonte.

According to several reports, the Browns have contacted the New York Giants about talking to defensive coordinator Perry Fewell.

Holmgren and general manager Tom Heckert will serve as the Browns’ point men in the search he described as “pretty wide. We’re not limiting ourselves in any way.”

If Holmgren can’t land one of his preferred candidates, it’s possible he will relocate his office and slide in as Cleveland’s coach. It would be a seamless transition, but that’s the backup plan. For now, Holmgren’s entering his first coaching search, hoping it will be his last.

“I don’t want to do this again,” he said. “Historically, if you look at teams that don’t have to do this very much, they’ve been successful. It’s very, very important that we get this right.”

The Browns haven’t gotten it right with a coach since returning to the league; Mangini followed Chris Palmer, Butch Davis and Romeo Crennel on Cleveland’s coaching carousel. The instability up top and lack of continuity perhaps best explains the Browns’ 64-129 record and one playoff appearance since their rebirth in 1999.

Mangini’s two seasons in Cleveland were marked by losing streaks, flickers of hope, key injuries and far too much drama for a franchise still looking for a foothold 12 years into its expansion era. The Browns didn’t have any luck, either.

All three quarterbacks suffered high ankle sprains this season, with injuries to Jake Delhomme and Seneca Wallace pushing rookie Colt McCoy into the starting lineup at least one year early. McCoy was supposed sit and learn but he handled the assignment like a seasoned veteran, and when the Browns stunned New England on Nov. 7, it appeared Cleveland had arrived.

Instead, the upset only triggered a slide. The Browns went 2-6 down the stretch, losing their final four games. Cleveland struggled in close games, going 3-9 in tilts decided by 10 points or less. Sunday’s loss dropped Mangini to 2-10 in the AFC North.

Holmgren was left with little choice but to cut ties with Mangini, who has two years left on a contract worth a reported $8 million. Mangini’s assistants remain under contract. Holmgren gave them the rest of this week off and will meet with the staff again next week. Defensive coordinator Rob Ryan may interview for the Panthers’ open position.

After being fired for the second time in just over two years, Mangini addressed his team one last time for nearly 20 minutes.

“In football, you go with through a lot of emotions with people, from laughing to crying to being angry to jubilation,” tight end Benjamin Watson said. “It’s definitely not a time to just say bye. I know it was tough for him. It was tough for us to hear it. But when you sign up for football, that’s kind of how it goes.”

Mangini was followed into the room by Holmgren, who didn’t provide any clues about who will take over. He challenged the Browns to get better in the offseason, a message McCoy, who spent time in Holmgren’s office this season analyzing film and his throwing mechanics, took to heart.

The trials of an eventful first pro season were not lost on McCoy. The former Texas star rose from third-stringer to perhaps the Browns’ future quarterback. He’ll begin his second year with a second coach.

“I’ve never been through a coaching change, junior high, high school, college,” he said. “It’s new territory for me, new ground. But it’s something that being in this business, being in the NFL, I’ve learned so many lessons just in my first year. This is just one more thing that has happened.”

In Cleveland, it happens quite a bit.