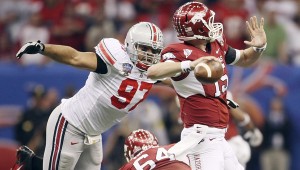 NEW ORLEANS — Ohio State might want to send a thank-you note to the NCAA for helping to end its bowl misery against the SEC.

Terrelle Pryor threw two touchdown passes, helping the No. 6 Buckeyes build a big lead, and Solomon Thomas made an interception with 58 seconds remaining that sealed a 31-26 victory over eighth-ranked Arkansas in the Sugar Bowl on Tuesday night.

Pryor and Thomas were among five Ohio State players found to have violated NCAA rules by selling memorabilia and getting discounted tattoos just before the Buckeyes (12-1) headed for the Big Easy. They were all suspended for the first five games of next season — but permitted to play in the Sugar Bowl.

Buckeyes coach Jim Tressel said all five pledged to return to school next season to serve the punishment.

In the end, Ohio State needed them all to beat a Southeastern Conference team in a BCS bowl for the first time. The Buckeyes had lost their previous nine postseason meetings against the SEC.

The group also included Dan Herron and DeVier Posey, who each scored a touchdown. But Thomas, the only backup among them, made the biggest play of all.

Arkansas (10-3) had a chance to complete an improbable comeback when Colton Miles-Nash leaped over two linemen to block a punt, putting the Razorbacks at the Ohio State 18 with 1:09 remaining.

But Thomas surprised Ryan Mallett by dropping into coverage from his defensive end position. Mallett never saw him and Thomas held on to the pick to seal the win.

Pryor has vowed to return for his senior season, even though he won’t be able to play until next October. He left the Ohio State faithful with a good memory, completing 14 of 25 passes, including a 15-yard TD to Dane Sanzenbacher and a 43-yarder to Posey.

Mallett was 24 of 47 for 277 yards, including a pair of touchdowns. But he’d sure like to have that last pass back.

Ohio State raced to a 28-7 lead in the first half. Sanzenbacher scored the first of his two TDs by recovering a fumble by Pryor at the end of a 34-yard run. Two Arkansas players knocked each other off the loose ball, and the Ohio State senior fell on it.

Herron scored on a 9-yard run, then Pryor hooked up with Sanzenbacher and Posey on touchdown throws that had it looking like a Buckeyes rout. Arkansas stopped the onslaught, but Ohio State was still comfortably ahead, 31-13 with just over 4 minutes left in the third quarter, after Devin Barclay booted a 46-yard field goal.

From there, it was all Arkansas — until the final minute.

In the last minute of the third, Mallett laid out a pass with perfect touch in the corner of the end zone. Jarius Wright ran under it and got a foot down for a 22-yard touchdown.

The Razorbacks might have been more inspired by the 2-point conversion. Mallett flipped a pass to tight end D.J. Williams, who was wrapped up and appeared stopped by Jermale Hines. But Williams somehow got his right arm loose and stuck the ball across the plane of the goal line, cutting the Buckeyes’ lead to 31-21.

Then, after backing up Ohio State at its own 4 with a punt, Arkansas benefited from a highly questionable call by the officials to pick up two more points.

Herron was stacked up at around the 2 by Anthony Leon, who shoved the running back into the end zone. But the officials didn’t immediately blow the whistle, Herron broke away briefly and then was swarmed over by Jake Bequette and Rudell Crim.

After briefly huddling, the officials ruled it a safety, despite Tressel’s protests that Herron’s forward progress had been stopped outside the end zone.

With the Arkansas side of the Superdome roaring and the momentum clearly on their side, the Razorbacks took the ensuing kick and drove into range for Zach Hocker’s third field goal of the game, a 47-yarder that made it 31-26.

Clearly desperate to swing the tide, Tressel gambled on fourth-and-1 from his own 38. He sent Herron diving over the line, and he came down beyond the first-down marker. Only one problem: he didn’t bring along the ball. Tramain Thomas stripped it away in mid-air, and even though the Buckeyes recovered, it didn’t matter. They fell on the loose ball behind the line, turning the ball over to Arkansas.

On the very next play, however, the Razorbacks were called for holding. Then, on third-and-16, Mallett found Lance Ray breaking open across the middle, but Arkansas was doomed by that familiar problem: yet another dropped pass.

Forced to punt, the Razorbacks backed up Ohio State to its own 4 again with 4:33 remaining. Miles-Nash’s block gave Arkansas one last chance to win it, but Thomas clinched it with his pick.

Pryor kneeled down twice, and Ohio State finally had that first bowl win over the SEC.