Buckeyes have plenty of questions to answer in 2011 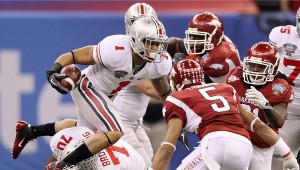 Ohio State running back Dan Herron (1) runs against the Arkansas defense in the first half of the Sugar Bowl at the Louisiana Superdome in New Orleans on Tuesday. (MCT DIRECT)

COLUMBUS — In the 121 years that Ohio State has been playing football, there probably haven’t been many offseasons with so many lingering questions.

Usually, a finish like the white-knuckle, 31-26 victory over Arkansas in Tuesday night’s Sugar Bowl would be enough to keep Buckeyes fans warm and giddy all through the remainder of a cold winter.

Yet despite that capper to a 12-1 season, there are an unending series of unsettling matters to be dealt with between now and the 2011 season opener on Sept. 3 vs. Akron.

“There’s never a shortage of story lines for the Ohio State season,” departing senior wide receiver and team MVP Dane Sanzenbacher said in the afterglow of the win at the Superdome.

OK, fine. But this many?

First, there’s the question of whether the “Tattoo Five” will be back. Next, there’s the problem of replacing half of the starters from the Sugar Bowl.

The athletic department is appealing to the NCAA. It’s trying to get a game or two cut off of the suspensions, although there is some criticism that the association has already been soft on Ohio State in allowing the five to play in the Sugar Bowl before beginning their suspensions.

All five could jump to the NFL draft early — all played well in the bowl game — and not risk injury or the vagaries of only having a little more than half of their senior seasons to impress pro scouts.

Thomas, who had the clinching interception deep in Ohio State territory in the final minute, said he thought all five would be back.

“I do. Everybody’s different from the situation that happened,” he said. “Everyone comes from different places; everyone’s financially different and economically different. We’re a team. I don’t know (for sure), but I would say so.”

The five pledged to coach Jim Tressel they were returning, but no one considers that binding. Pryor said as much, calling it just a form of an apology to Buckeyes fans.

With many questions about his passing ability, Pryor said he needs another year of seasoning.

“I don’t think I’m really ready for the NFL,” said Pryor, who passed for 221 yards and rushed for 115 in the victory over Arkansas. “I think I’ve got a lot of learning and better decisionmaking I have to make on and off the field. And even off the field, I think I need to grow up a little bit more and mature as well in that standpoint.”

Pryor and Tressel have discussed the future.

For how ever long Pryor is on the sideline next season, his spot could be taken by current backup Joe Bauserman, scout-team rookies Kenny Guiton and Taylor Graham, or even incoming prized recruit Braxton Miller, who is expected to start school this semester.

The Buckeyes also seem to be well stocked at tailback behind Herron. Jordan Hall, Jaamal Berry, Rod Smith and Carlos Hyde will all vie for playing time during Herron’s suspension.

Adams wouldn’t comment on what he intended to do. Herron said he would return. But no one knows for sure what will take place before the deadline for early entries later this month.

And, of course, there is always the possibility that more revelations might come out of the federal investigation into the tattoo parlor and its relationship with players. Then, there is the question of how to replace the heavy losses to graduation.

The defense will be decimated. Only four starters from the bowl return. The losses include the top two linemen (Cameron Heyward, Dexter Larimore), two of the three linebackers (Brian Rolle, Ross Homan), and four starters in the secondary (cornerbacks Chimdi Chekwa and Devon Torrence, and safeties Aaron Gant and Jermale Hines).

There are plenty of willing backups although the linebacking corps will be the greenest it has been in years.

“I’m just waiting to see this appeal process (through) and everything, but I’m looking forward to the 2011 Bucks,” Adams said. Asked if he will return, he said, “I’m not sure. We’ll see.”

Regardless of what the juniors decide, roughly half of the starters will be gone. That’s a lot of holes to fill.

Plus, the Buckeyes have a stout schedule next season. They play at Miami in their third game, and also have a road date at Big Ten newcomer Nebraska on Oct. 8.

Hines tried to ease the minds of concerned Buckeyes fans.

“I don’t worry at all,” the departing senior said. “People say we lose a lot of big names every year, so Ohio State is one of those schools that is always reloading and never rebuilding. Those guys will be fine.”