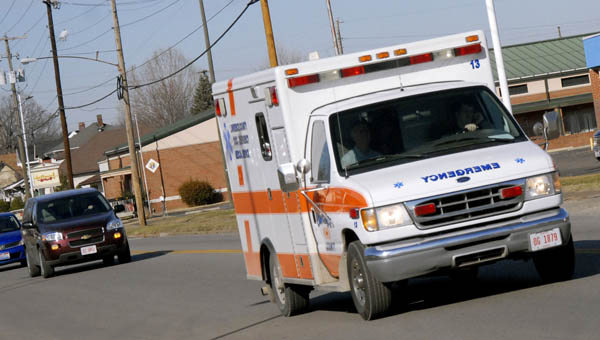 It’s been less than a week since the new Lawrence County Emergency Medical Services has been up and running. And those first days have been busy ones for the paramedics and EMTs on board the ambulances.

“We are averaging about a run an hour,” Buddy Fry, director of the LCEMS, said Wednesday morning. “It is about the same (as with the former system). We intended a seamless transition so the public would know no difference. There wasn’t any. They would call 911 and a squad was sent out.”

For about four decades ambulances were dispatched through the tri-county Southeast Ohio Emergency Medical Services. However, that came abruptly to an end when Athens and Jackson counties pulled out of SEOEMS this summer, forcing Lawrence to start its own emergency medical service.

During Saturday and Sunday there was a total of 48 runs. On Monday there were 27 runs and Tuesday had 22 runs.

“(The new system) is probably a little faster,” Fry said.

Under SEOEMS calls made to the county’s 911 dispatching center were transferred to the SEOEMS dispatcher at Gallipolis who then sent out a Lawrence County ambulance.

Now the local 911 dispatcher sends out the ambulance directly.

“I have just sent out two letters of commendation to the field staff and dispatch staff,” Fry said about the first days of operation.

Also on Wednesday the paper copy of the ambulance service’s drug license was received and faxed to Para Star, the company the Lawrence County Commissioners hired to get the Medicare/Medicaid certification for the service.

The emergency service must have that certification before it can bill Medicare and Medicaid for ambulance runs. The service already can bill private insurers through Medical Claims Assistance, the Huntington, W.Va., billing service commissioners hired on a temporary basis last month.

“It is my understanding that this is the last item that we have to furnish,” Fry said. “That is the only item that we lack to get the application filed.”

Typically it can take between 30 to 90 days to get that certification.

“It is my understanding the billing company can bill (Medicare) and they will pay retroactively,” Fry said.

The 911 dispatching center has one more full-time person to handle the extra work load with the new ambulance service.

Also at the dispatching center is another system whose function is to account for each call that comes in.

“It’s making sure the billing company has every call and not get lost in cyberspace,” Fry said.

An Ironton man running from the law still wanted a hot date for New Year’s. He got a stay in... read more