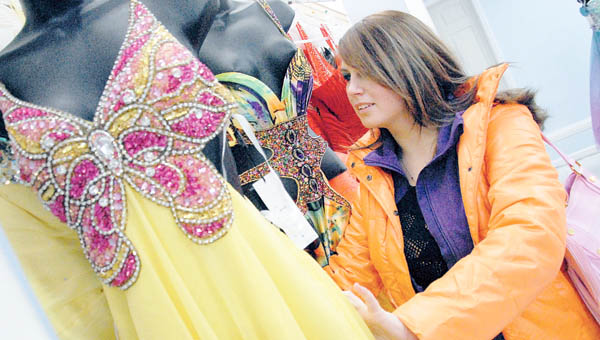 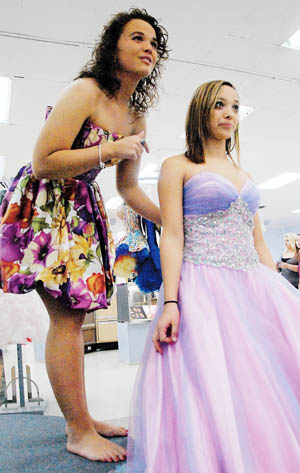 “If this is the dress you want then get the dress” says friend Mycah Pemberton, left, to her friend Taylor Reber as they try on dresses at Glitters.

Downtown Ironton has a little bit more glitz and glamour with the help of a business that just relocated there.

The store, owned and operated by Tracey Ferguson, moved recently from its former Coal Grove location.

“I’m excited about participating in bringing back Ironton,” she said. “Bringing a little life back to town.”

Ferguson said the business had a great year last year and needed to expand. The new location is much bigger than the old one, she said,

“Our back room (in the new location) is the size of our old store,” Ferguson said.

Kara Moore has worked at the store for the past two years.

The new store is in a building owned by Bill Dingus. The space was last used as a Grandview Outlet and had been empty for a while, she said.

“We’ve done everything,” Ferguson said of the renovations. “It was really just an empty space.”

Besides prom dresses, the store rents tuxedos and sells shoes, jewelry, purses and undergarments. Ferguson has a few items for weddings and hopes to have more by May. Bridesmaids dresses are available by order.

The store also has party dresses.

“I hope to get in on the gala circuit,” Ferguson said. “That’s huge in our area. Everyone has a gala now.”

While it’s still a few months before prom season, several girls were in the store last weekend trying to find the perfect dress. Ferguson said the upcoming weekend, which includes the Martin Luther King Day holiday, is traditionally the biggest weekend for prom dress sales.

Early shoppers want to make sure they are the only one at their high school wearing a particular dress to prom.

“You can get your eyes clawed out if you show up in the same dress as someone else,” she joked. To make sure the unthinkable doesn’t happen, Glitters has a registration system that tracks which high school a customer is from and what dress she purchases.

“We really pride ourselves on customer services,” Ferguson said. “I want someone to come here and feel like a princess.”

That service is not lost on the stores faithful customers like Lauren Watson, a Dawson-Bryant High School student.

Watson, picked out a white dress with gold sequins, has been shopping at the store each year for the past couple of proms.

HANGING ROCK — A portion of County Road 1A may start looking brighter, thanks to the efforts of Rumpke Recycling.... read more