Packers, Ravens advance to next round 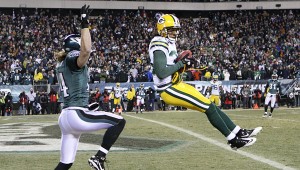 PHILADELPHIA (AP) — You can put Aaron Rodgers in that elite quarterback class. He’s got his first playoff victory.

Rodgers had to watch from the sideline while Vick nearly led the Eagles back. But Tramon Williams intercepted Vick’s pass for Riley Cooper in the end zone with 33 seconds left to seal the win.

The sixth-seeded Packers (11-6) are heading to Atlanta (13-3) for a divisional playoff game next Saturday night.

Rodgers patiently waited three years to become Green Bay’s starter and took over after Brett Favre’s messy departure before the 2008 season. He long ago made Packers fans forget about Favre, and now has punctuated his impressive resume with his first playoff win in two tries.

It wasn’t Rodgers’ fault Green Bay lost 51-45 in overtime to Arizona last January. These aren’t the same Packers. This patchwork squad has 10 different starters, and a much stronger defense.

“I never felt like there was a monkey on my back,” Rodgers said. “I’m just so proud of these guys. We fought hard today. Big interception by Tramon who’s had a great season for us.”

Clay Matthews, Charles Woodson and Co. contained Vick for the most part. Vick threw for 292 yards and ran for 33 in his first playoff start since losing the 2005 NFC championship game on the same field as a member of the Atlanta Falcons.

Ray Lewis, Ed Reed and the rest of the battle-tested Ravens rattled the Chiefs into five turnovers and held their offense to 25 yards in the second half in a 30-7 playoff victory Sunday.

Baltimore (13-4) broke open a close game with a touchdown and two field goals off turnovers in the second half. Kansas City (10-7), which set a club record with a six-game improvement to win the AFC West, now go into the NFL record book as the only team to lose seven postseason games in a row.

The Ravens also shook off the family tragedy that Reed has dealt with since Friday morning, when the Pro Bowl safety’s brother apparently disappeared into the Mississippi River.

Baltimore will hit the road again to play AFC North rival Pittsburgh on Saturday in the third matchup against the Steelers this season. The bitter rivals split their seasons series, with each winning on the other’s home field.

The Ravens led only 10-7 in the third quarter when Kansas City lost a fourth-and-inches gamble and then collapsed, quickly.

Dawan Landry stopped the play, throwing Jamaal Charles for a 5-yard loss. On the next play, Tamba Hali drew a 15-yard penalty for a late hit on Flacco and the Ravens drove in for Cundiff’s 29-yard field goal, making it 13-7 with 6:36 left in the third.

A moment later, Lewis put a jarring hit on Dexter McCluster, knocking the ball loose. Chris Carr recovered on the Kansas City 17, leading to another 29-yarder by Cundiff.

By JIM WALKER Tribune Sports Editor WELLSTON — What a difference a day makes. In a 50-45 loss to John... read more