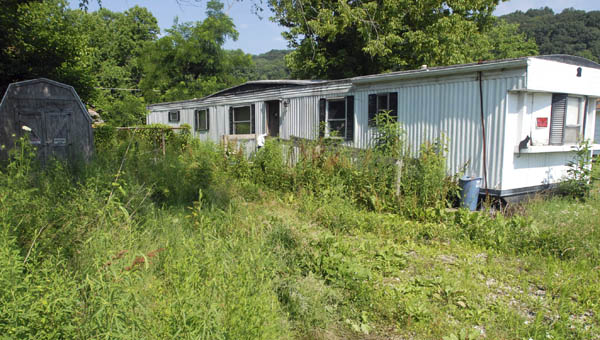 This unoccupied structure located on Howard Drive off of Charlotte Lane in Burlington was the target of a neighborhood fight against eyesores.

BURLINGTON — A neighborhood that was galvanized into a grass roots fight to get rid of a eyesore can declare victory.

At its regularly scheduled Thursday meeting Lawrence County Commissioners approved a demolition agreement to tear down an abandoned trailer on Howard Drive in Burlington.

“It’s a long time coming,” Harriette Ramsey of Charlotte Lane, said. “I have talked to some of my neighbors to tell them about the good news. We are anxiously anticipating getting our neighborhood back.”

For more than two years neighbors in that area had gone to a variety of governmental agencies to get the unoccupied trailer removed. Ramsey, one of the leaders of the fight, had gone through a gamut of agencies from contacting the health department to township trustees to the Ohio EPA to get help. This summer Ramsey came to the commissioners seeking assistance.

One of the neighbors’ biggest concerns was that the trailer had never been attached to a sewer system when it was occupied by renters with raw sewage following onto the lot, Ramsey said. Some residents had to call in exterminators to get rid of infestations of cockroaches.

“You come into a neighborhood and try to be equal to what we are doing,” Ramsey said. “Hopefully anyone who will come here will see what we are already doing. We are not transients. We have an investment. We want to be sure everyone else lives up to the way we have always lived.”

The trailer will be torn down with funds from a block grant through the Ironton-Lawrence County Community Action Organization.

“Hopefully, we will clean up that eyesore in that community,” Commissioner Jason Stephens said.

In other business the commissioners:

• Signed a letter of support for Perry Township for grant application to purchase a dump truck with snow blade and box spreader through the USDA;

• Appointed Boggs to the Ohio Valley RC&D Council for a three-year term;

• Filed the weekly dog warden report where 62 dogs were destroyed; six sold and four redeemed. There are 45 dogs now in custody;

• Heard that the Lawrence County Emergency Medical Service has a first responder agreement with Washington Township and that billing has begun for the EMS.