Cold weather may be factor as playoffs reach 2nd round 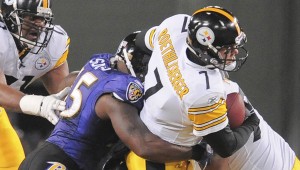 Forget the cold. It’s going to be smokin’ hot in the AFC playoffs this weekend.

No one is trying to shove aside the action in the NFC, but the verbal activity heading into Ravens-Steelers on Saturday and Jets-Patriots on Sunday has reached seismic levels.

Jets cornerback Antonio Cromartie disrespects Tom Brady, then dares the Patriots’ star quarterback to make him a target in the divisional round game at Foxborough, Mass.

As if these opponents aren’t heated enough rivals in their respective divisions.

There’s nothing quite so tangy in the NFC, where both games also are rematches. Neither the Packers at Falcons match Saturday night nor the Seahawks at Bears on Sunday has been accompanied by so much trash talk or accusatory tones.

Not that you expect everyone to get along as they pursue a spot in the conference title games.

“You shouldn’t like who you are going up against right now,” said Jets coach Rex Ryan, hardly a wallflower.

“This is the playoffs. I can tell you our whole team respects Brady and the Patriots. But hey, we don’t like any of them right now. You shouldn’t. (Former Jets running back) Danny Woodhead is a great kid, but I can’t stand Danny Woodhead right now.

“I think that’s just part of it, and trust me, the feeling is mutual.”

Presumably, he won’t be wearing the T-shirt that displays “HEY PITTSBURGH” and a purple Raven and a hand with the middle finger extended.

“There isn’t any message,” he insisted. “This is just, like I always say, I put on for my city. They rep their city, and I’m repping mine. So, here we go.”

Each side won a superb defensive game on the other’s field, which should give Baltimore some confidence. But the Ravens never have won a playoff game in Pittsburgh.

Plus, Steelers quarterback Ben Roethlisberger was serving the last game of his four-game suspension when the Ravens won on Oct. 3.

The game-breakers in this one are guys like Suggs, Ed Reed and Ray Lewis for Baltimore, Troy Polamalu, James Harrison and LaMarr Woodley for Pittsburgh. Defenders all.

“You can talk about the offense, but these are the two best defenses,” Roethlisberger said. “They are great defenses with a lot of exotic-type blitzes and exotic looks. Both groups are veteran, so it’s all about the offense that makes the fewest amount of mistakes. So, I think that’s why it’s always close. You never want to make a mistake, especially in the playoffs, because everything gets a little tighter. A defense like that, you’re under a microscope even more.”

Green Bay is on a roll, winning its last three games when one loss would have ended its season. The 21-16 victory at Philadelphia was Aaron Rodgers’ first in the postseason as Packers quarterback, and he performed superbly in a 20-17 loss at the Georgia Dome on Nov. 28

He also lost a fumble near the Atlanta goal line in that game, something he seems to remember more than going 26 of 35 for 344 yards with one TD and no interceptions.

The Falcons were 7-1 at home, where they haven’t had a playoff game since the 2004 season, when they routed the Rams 47-17 in the divisional round. They’ll face an offense that suddenly became versatile when rookie James Starks rushed for 123 yards in Philly.

Atlanta already has that offensive variety with Matt Ryan throwing to Roddy White and Tony Gonzalez, and Michael Turner running the ball.

“That’s the thing I think will make them even more dangerous,” Falcons coach Mike Smith said of the sixth-seeded Packers. “With the way they’re running the football, they have a chance to be even more multidimensional. They ran the ball probably as effectively as they’ve run it all season.”

How can a losing team get within a step of the conference championship game? Well, win a weak division (the NFC West, which Seattle took at 7-9, the first under.-500 division winner). Then play an inspired game featuring loads of big plays against an undermanned opponent — albeit the defending Super Bowl champs.

Now, the Seahawks go back to Chicago, where they won 23-20 in October, their best game of the regular season, and if they do it again, the NFL has a 9-9 club one win away from the big game.

Seattle is brimming with confidence after outscoring New Orleans. Chicago is healthier than the Saints, has a much better defense, and has improved significantly since falling to the Seahawks, particularly the running game with Matt Forte.

Forte ran for 717 yards over the final nine games, averaging 4.9 yards per carry. He expects to carry a big load Sunday.

“I don’t think we have a choice,” Forte said. “We can’t go out and do what we did last time and throw the ball 40 or 50 times and run the ball 10 times. We have to have a balanced offense.”

The AFC foes split two games, with the Jets controlling the second half of a 28-14 home victory in Week 2, then the Patriots dominating from the outset of a 45-3 Monday night romp on Dec. 6. New England won eight straight to close out the season, and Brady has won an NFL-record 28 consecutive home starts.

He also is 8-1 in home playoff games, but the defeat came last year against Baltimore in the wild-card round.

Brady noted he’s been called worse than what Cromartie sent his way, and Brady’s history is to send lots of passes — completed passes, several for touchdowns — the way of anyone who insults him or his team. Remember Pittsburgh’s Anthony Smith calling out the Patriots three years ago, then getting victimized time and again by Brady?

Big talk aside, the Jets must find a pass rush and need to hold the ball on offense to have any chance of a fourth road playoff win in five tries under Ryan. And they need a fast start.

“It was the perfect storm,” Jets second-year QB Mark Sanchez said of the lopsided loss at Gillette Stadium. “We played very poorly. We started off slow. They started off fast. They kept rolling (and) we didn’t bounce back. When you get down like that, then you start forcing balls over the middle, you start throwing interceptions and you just end up buried.”

Shurmur latest to try to turn Browns around