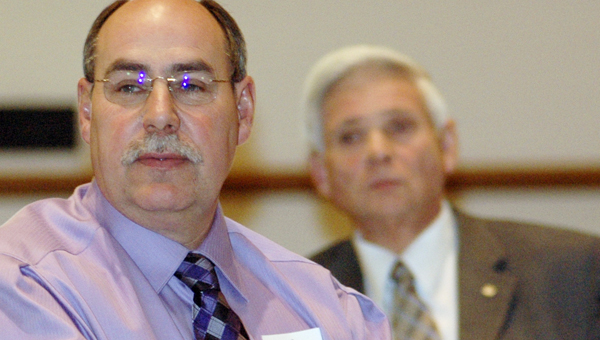 Just two weeks into 2011, several Lawrence County officials started the year off on a positive note Thursday by discussing what’s going right in the area.

During the Ironton-Lawrence County Joint Symposium at Ohio University Southern, the officials gathered to talk about the progress going on in the county.

The event brought together leaders from the City of Ironton, Ironton and Lawrence County port authorities, the Ironton-Lawrence County Community Action Organization, the Lawrence Economic Development Corp. and some village governments.

Waldo said the original purpose of the symposium was to allow the community leaders to get to know each other. After being elected to city council, he realized that he and other council members were unfamiliar with the members of the Ironton Port Authority. The event helped to remedy that.

The goal is to get the officials together at least once a year.

Only in its second year, Waldo said the attendance increased from last year.

Ironton Mayor Rich Blankenship told the group about the progress of the Ironton-Russell Bridge project.

The bridge is on schedule to go out to bid this summer and construction is scheduled to begin this fall, he said.

Besides the bridge, the city is looking forward to progress on its sewer relining project, signalization project and riverfront development, among others.

Bill Dingus, LEDC, director, told those gathered that despite a rough economy, the county’s unemployment rate is lower than others in the state.

He praised the leaders for their ability to work together.

“It’s truly wonderful that hardly a day goes by that we don’t find ourselves in a joint project,” he said.

The symposium also heard from Dick Gilpin, mayor of the Village of Chesapeake. Gilpin told the group of the village’s efforts to improve infrastructure in the village and upgrade its village hall.

Several other projects in the county were discussed including the Ninth Street area in Ironton, an intermodal facility at The Point, and a future 24-hour emergency room and medical campus.

Waldo was pleased with the attendance, he said, and hopeful that the event will happen again next year.

“We’ll do this again next year if there’s a desire,” he told the officials. “I think it’s a real good thing.”

An Ironton man who held his girlfriend against her will for two days was sentenced Wednesday for felony domestic violence.... read more