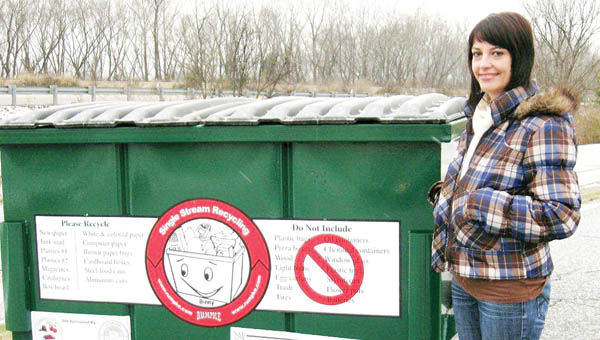 For people who say the state of our environment isn’t an issue, one Ohio University Southern student would tell the naysayers they couldn’t be more wrong.

Jana Riggs, 30, is currently a full-time senior majoring in early childhood education and minoring in art at OUS. On top of that she is a student worker at the OUS Proctorville center as well as an assistant for an art professor.

Busy as she is, she still finds time to do what she loves, spread the word about recycling. Most recently, Riggs has gotten another hat to wear, as facilities management director, Adam Riehl, enlisted her help in assisting the department in implementing recycling programs at all of OUS’ facilities and coordinating their 2011 Recycle Mania project.

“This is something I really like to do” Riggs said. “I’m pretty excited about it.”

Earlier this week, Riggs was on site to welcome a brand-new, shiny, green recycle drop-off bin a part placed at the OU’s Head Start Center in Hanging Rock. The Lawrence-Scioto Solid Waste Management District placed the new drop-off bin there in hopes of renewing the community’s participation in recycling.

The new bin is apart of the LSSWMD’s five-year EPA plan, which replaced the former curbside recycling programs in Hanging Rock and South Webster that failed.

Dan Palmer, district coordinator for LSSWMD, said when the curbside pilot program began, enrollment was very poor. So poor in fact, only 14 homes in Hanging Rock and less than 50 homes is South Webster participated.

Despite that, Palmer said the district, which includes Lawrence and Scioto Counties, has shown an increase in recycling. He said for 2010, 1,376 tons of recyclables were collected. That’s way up from the first collection year in 2006, which was 111 tons.

“It has been rising every year,” Palmer said, “and it continues to increase.”

With the new bin at the Head Start Center, and also a new one at the Community Action Organization Family Medical Center in Chesapeake, that brings the total of drop-off sites to 34 district-wide, with a total of 80 bins.

“We want to thank OU for allowing us to place the (bin) on their property,” Palmer said.

And Riggs said she hopes even more people will get on board with recycling.

“I think it is very important that (people) realize that new things can be made out of those materials,” she said. “A lot can be avoided. We know that landfills are not very good and that’s pretty much where everything is going if we don’t recycle. Even plastic bottles can be turned into benches for the park.”

Riggs, who grew up in Germany, said she as been recycling all her life, using reusable cloth bags for shopping and returning glass bottles for deposits.

“That’s how I’ve been raised, so it’s not really hard for me to do it,” she said. “I don’t mind giving people tips if they want to know them.”

In a few weeks, Riggs will help the university kick off Recycle Mania, a competitive program that allows colleges and universities to promote waste reduction activities to their campus communities.

With each week’s reports and rankings, participating schools watch how their results fluctuate against other schools and use this to rally their campus communities to reduce and recycle more.

Riggs said the kickoff would be Jan. 23 and run through April 2.

“Community members are welcome to drop off their recyclables at our drop-off if they choose to,” she said. “That’s going to be better for us.”

Riggs said OUS is a great place to learn about recycling and spreading the cause.

“A university is a great place because we’re going there to be educated,” she said. “Why not extends that a little bit further? And then everybody can take it home and share it with their families and hopefully it will spread.”

A legacy and a dream not forgotten

“I say to you today, my friends, so even though we face the difficulties of today and tomorrow, I still... read more