Vikings’ Taylor has nose for ball 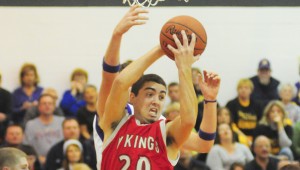 Symmes Valley Vikings’ senior forward Luke Taylor (20) has a knack for being around the ball and getting rebounds. (The Ironton Tribune / Kent Sanborn of Southern Ohio Sports Photos.com)

The Symmes Valley Vikings’ 6-foot-1 senior forward seems to have a bloodhound’s nose for finding the basketball, and he turns this innate ability into a bounty of rebounds.

Pulling down rebounds in double figure numbers is nothing uncommon for Taylor. In fact, it’s almost a news flash when he is in single digits. Taylor attributes his rebounding prowess to hard word.

“It’s a knack I have. I always seem to be where the ball is. I seem to know where it’s going to come off (the rim) at,” said Taylor.

Symmes Valley coach Jerome Fuller agrees with Taylor that hard work has been the key. But Fuller said Taylor takes it to another level.

“The one big thing is he is a kid who doesn’t take plays off. That’s why he’s able to get the rebound,” said Fuller.

“He’s not the kid who misses a shot and loafs down the floor. Most high school kids and players in general play hard and then don’t play. He’s consistently a hard worker on both ends of the floor. He’s definitely a winner. He wasn’t to win basketball games.”

Taylor said rebounding has always been a trademark of his style of play since the first time he picked up a basketball, and he’s been successful despite playing against taller players throughout his career.

“It’s simple fundamentals I’ve known since I was a little kid. (Rebounding is) my task to do on the floor,” said Taylor. “(Size) never crosses my mind. They’re all bigger than me. I’ve been used to it forever.”

But rebounding isn’t the only thing Taylor does well, and Fuller said the senior has improved in all phases of his game.

“He’s made an effort to shoot better and he’s done that through hard work,” said Fuller.

Taylor said he knew as a senior that he had to step up his game.

“We lost a few seniors who helped score our points. Being a senior, I need to step up and fill their shoes,” said Taylor. “I’ve tried to move my shot out a little bit to nine or ten feet.”

Fuller said Taylor isn’t the flashiest player on the floor, but he always manages to get the job done.

“He’s not afraid of contact or getting hurt or bruised. You might not be impressed by watching him, but when the game is over you look at his numbers and his numbers are always impressive,” said Fuller.

An outstanding baseball player, Taylor would like to play at the next level. But for now, he just wants to concentrate on basketball and helping the Vikings improve on their 7-3 record.

“The only thing I’d like is to make it to the Convo in basketball,” Taylor said of the district tournament held at Ohio University’s Convocation Center. “I’d like to make all-conference award and any all-district awards.”

Knowing the way Taylor works, he could very well be barking up that tree.

By JIM WALKER Tribune Sports Editor Ironton coach Doug Graham got to see a lot of different players and he... read more