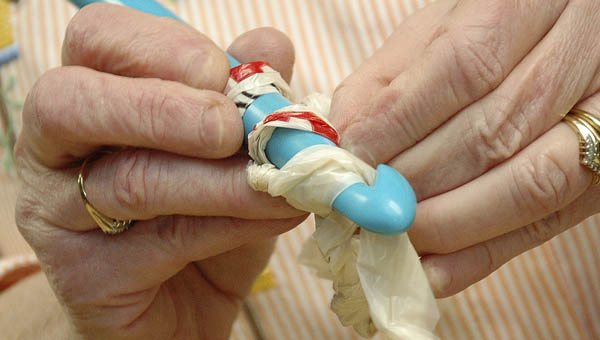 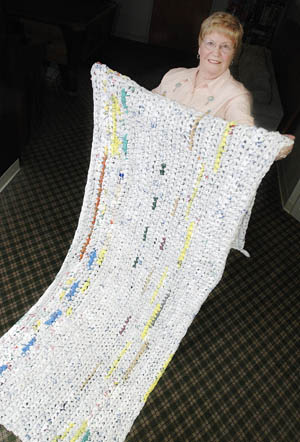 South Point resident Edna Moore displays her quilt made from many plastic grocery bags at the Lawrence County Multi-Purpose Center at Sybene. Moore used over 150 bags for her recycled mat.

Some people reuse them as trash bags for tiny waste bins. Some people take their lunch to work in them. Dog owners bring them along while walking Fido. And others just throw them away.

Paper grocery bags are nearly extinct and plastic bags are everywhere. With so many uses for the flimsy conveyance of food products, one South Point woman has taken it upon herself to find one more use.

Edna Moore is a regular of the Sybene Senior Center in South Point. She attends many activities at the center, including the weekly crocheting class on Fridays.

It was here that she learned how to turn plastic grocery bags into a community service project.

Moore said Phillis York, a member of a Baptist church in Proctorville, came to the center and talked about a project her church was doing to help the homeless community. It involved hundreds of grocery bags and some serious crocheting spirit.

With the help of her friend, Les Wilson, and donations of bags from seniors at the center, Moore began the project of turning bags into floor mats. Wilson cut the handles and seams off of the bags and Moore crocheted them all together with her oversized, blue crochet hook. Her first mat, over eight feet long, took months to complete and she wasn’t sure how many bags it took.

Stephanie Helms, community outreach coordinator, and Dan Palmer, district coordinator, said the project intrigued them right away. Palmer said he was so impressed, he wanted to take a mat to his quarterly state EPA meeting.

“When we have our EPA quarterly meetings, they always want to know what’s going on in the district,” Palmer said. “I’m going to recognize this lady for her efforts.”

He also donated money to the center’s exercise equipment for the mat.

Palmer said that environmental agencies, like the LSSWMD, are trying to deter the use of plastic bags in grocery stores.

“We know 500 billion to one trillion of these plastic bags are consumed each year,” he said. “That is a humongous amount. There are so many countries now that are banning these plastic bags. Here’s a lady that’s made a useful thing of it.”

China, for example, he said, has banned the bags, which in turn has saved the country 37 million barrels of oil. Plastic grocery bags, Palmer said, are made from polyethylene, which is made from oil. San Francisco, Calif. has also banned the bags.

Palmer said he hoped that showing the mat at the EPA meeting would inspire others to help the homeless as well.

Moore, much like the other seniors at the center who do community projects, doesn’t do it for the glory.

Making the mats for the homeless, she said, “It makes you feel good. I’m going to continue to make them. There are always people that can use them.”