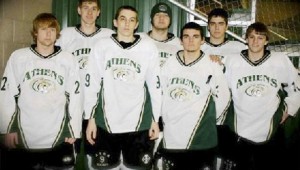 Take a wide receiver in football, tell him to run the 1600 in track and swing a hockey stick as he rounds the track.

Obviously, that’s not going to happen. But if it were possible, Pierce Reeves would be that player.

The 5-foot-9, 145-pound Reeves is a senior at Ironton High School. He was a wide receiver on the football team that reached the Division IV regional finals. He was a key member of the cross country team that finished seventh in the state meet, and he plays high school club hockey in the Athens Youth Hockey Association.

Reeves began playing hockey when he was in the seventh grade. He will be honored along with the team’s other seniors at 3:30 p.m. Saturday in his final home game at the Athens hockey arena located behind Ohio University’s Peden Stadium.

So how does someone in an area with no hockey get hooked on the sport?

“When I was four, Spare Time had a roller hockey league and I kind of picked it up and I’ve played ever since,” said Reeves.

“Playing my last game is hard to put into words. I don’t want it to end, but I’m ready to move onto the next stage of my life.”

The Athens team plays in other cities such as Cincinnati and Louisville, Ky., but most of the road games are in Columbus at one of five different arenas.

“Most of the team in the league are based in that area,” said Reeves.

Living in Ironton and traveling to Athens once a week for practice has been difficult, especially when the team gets the last time slot at 8:45 p.m.

Reeves said it has been hard, but more so for his mother, Michelle Allen.

“I only go once a week because it’s so far. My coach understands,” said Reeves.

“But I have to give a lot of credit to my mom. Without my mom, I couldn’t do it. She drives me everywhere and she does it after she gets off work. She has to drive and doesn’t get to play, so I don’t complain. She has it the hardest.”

Although Reeves has an obvious love of hockey, he said it doesn’t diminish his affection for football and track. He said football was fun and he enjoyed Ironton’s tournament run that rivaled the hockey team’s 17-game winning streak and state ranking.

“Just in the sport itself, I’d probably play hockey if I had the chance, but I would put football ahead of it because I can play with guys I grew up with,” said Reeves.

“Football was different in my connection with my teammates. Being in the locker room and letting it out after a game with Michael (Lawless), Brian (Warner) and Tyler (Hager). As far as a sports standpoint, it’s pretty similar.”

Reeves said training for the three sports are different. He said hockey requires a more strenuous workout because it is physical and there is more movement over long periods of time.

“You have to train different for each sport. Hockey is the most tiring of the three,” said Reeves.

When hockey ends, Reeves will move to track as his senior year winds down. He hopes to continue his running career at the college level.

“If it was the proper situation and I had a free ride for all three, I’d pick hockey. Runing is my future right now. I’ve got more exposure,” said Reeves. “But I’ll try to play intramural or club hockey in college if I can.”