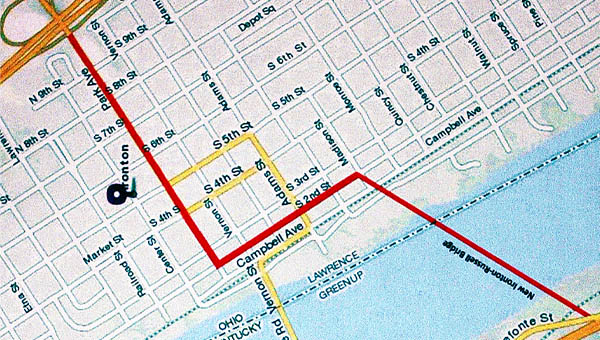 The bold line indicates an extension of State Route 93 going into downtown Ironton along Park Street and turning on to South Second Street that will lead to the new Ironton Russell Bridge. This schematic and many others were on display Tuesday afternoon during an Ironton Bridge update event at the Ohio Department of Transportation. 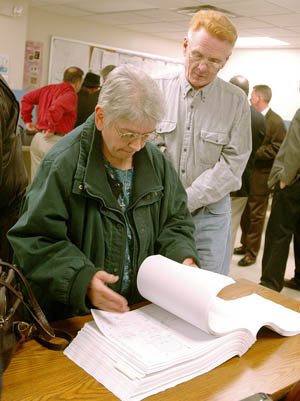 The future Ironton-Russell Bridge was the topic of discussion at a public forum hosted by the Ohio Department of Transportation Tuesday evening.

ODOT officials as well as local officials and residents packed a meeting room in the Lawrence County ODOT garage on Third Street in Ironton to talk about the project, set to start in the fall.

“The goal is an Oct. 6 sale date,” Kathleen Fuller, public information officer for ODOT District 9, said, adding that the contract would be awarded one or two weeks after that.

On the Kentucky side, the $85 million bridge will start at a new intersection which will be constructed at Bellefonte Street and U.S. Route 23 in Russell and cross the Ohio River, curving left onto Second Street and end halfway between Jefferson Street and Adams Street.

The bridge as well as Second Street and Park Avenue will be designated as State Route 93. Besides an opportunity for ODOT officials to hear public comments and answer questions, the forum served as a way to journalize those streets as part of State Route 93.

“At the same time we’re talking about where we are with the final design stages of the project,” Fuller said. “It’s sort of a technicality but it’s a really important part of the project.”

Having the bridge designated as a part of State Route 93 will make the City of Ironton eligible for future funding relating to the bridge, Fuller said.

ODOT officials are currently working on permits for the bridge from agencies like the Ohio Environmental Protection Agency, the Army Corps of Engineers and the Coast Guard. It is also finishing up property acquisitions for the construction.

Fuller said the feedback from the community has been positive and that the only comment submitted so far was a general question about the bridge.

The proposed bridge has been in the works since the 1980s, though the agency has been actively pursuing the project for the past 10 years, Fuller said.

It’s been too long, according to some of the Ironton city officials who were on hand at the forum.

“It’s going to be a great project for the city and it’s long overdue,” Blankenship said. He added that the city would be as accommodating as possible of the construction and will offer a laydown yard for the materials.

For some, like property owner Brenda Morris, the meeting was a chance to get answers. She came to ask officials if the building and property she owns– KFC on South Second Street– will be affected by the placement of the new bridge.

“I just want to know what they’re going to do and how it’s going to affect my property.”

ODOT will accept written comments about the bridge through Feb. 15. They can be mailed to: Ohio Department of Transportation-District 9, Attention: Toby Smalley P.O. Box 467, Chillicothe, OH 45601.