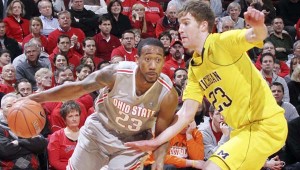 Ohio State’s David Lighty (23) drives against Michigan’s Evan Smotrycz (23) in the first half at the Value City Arena in Columbus on Thursday. (MCT DIRECT)

Sullinger hammered away inside for 19 points and 15 rebounds and No. 1 Ohio State came back from a sluggish half to beat Michigan 62-53 Thursday night, helping the Buckeyes open with 23 wins for the second time in school history.

Beilein then focused on one pivotal play. In the middle of a critical 13-5 second-half run, Ohio State’s Jon Diebler air-balled a 3 from the left corner. But Sullinger correctly positioned himself to catch the ball and put it back in.

“I turned around and said, ’The last time I saw that, Blake Griffin did it,”’ Beilein said, referring to the former Oklahoma star now with the Los Angeles Clippers.

“It’s incredible body control and hands. He’s hard to guard and you get in foul trouble.”

Fouls were a huge factor in the second meeting between the teams in 22 days. The Buckeyes won the earlier meeting in Ann Arbor, Mich., 68-64, holding off the young Wolverines at the end.

This time, Michigan led by six points early in the second half before Ohio State (23-0, 10-0 Big Ten) began looking to the 6-foot-9, wide-body Sullinger every time down the floor. As a result, he absolutely wore out defenders and was a huge reason why Michigan was called for 23 fouls to the Buckeyes’ 11.

The Wolverines shot just four free throws in the game; Sullinger shot 11 (making 5) by himself. The Buckeyes were 15 of 25.

“I kind of knew that the doubleteam was coming baseline so I was going to explore and go to the middle as much as I can,” he said. “They were helping off of Dave (Lighty) and sometimes Dallas (Lauderdale). I knew the wing was open, so I was trying to get to the middle to break down that doubleteam for us to get a better chance to score.”

It felt like a struggle for the first 39 minutes for the Buckeyes.

“Our guys did a very good job of maintaining composure when things didn’t go the way that we thought that maybe they were going to go,” coach Thad Matta said. “Probably the biggest thing was continuing to lock down and defend. Obviously our offense wasn’t as effective as it needed to be. We didn’t make shots and we had some good ones, some open ones. But the defense probably saved us.”

“We had too many turnovers. We weren’t playing like ourselves. And we weren’t rebounding either,” Buford said. “So (Matta) got on us about that. And we had to play with more intensity.”

An 8-0 run which featured a 3 by Buford, baskets by Sullinger and fellow freshman Aaron Craft and a free throw by Lighty allowed Ohio State to break free from a tie at 36, only to have Evan Smotrycz and Hardaway hit 3s to cut the gap to two points. But Sullinger took a behind-the-back feed from Buford for a bucket inside, then hit two free throws in the double-bonus to push the lead back to six with 6 1/2 minutes left.

Ahead 50-45, Craft spun for a reverse layup and after Diebler had a steal at the other end, Sullinger powered his way for a bucket to push the lead to nine. Michigan didn’t threaten again.

It was just another tense, close game for the Buckeyes. Eight of their last nine games have been decided by five or fewer points — and they’ve won them all.

“The biggest thing, we have confidence in our offensive ability,” said Craft, who had eight points off the bench. “We know we can put people out there that can make shots. Whether they’re falling or not in the first half, we’re going to keep shooting the ball and it’s going to end up falling.”

There are more tests ahead for Ohio State, starting with a difficult trip to Minnesota on Sunday.

Beilein acknowledged how hard it is hitting the road in the Big Ten, but said the Buckeyes might just have the makeup to keep winning all the close ones.

“When you go on the road to play, anybody can get you any time,” he said. Then he added, “Ohio State is really good. There’s a reason why they’re undefeated.”