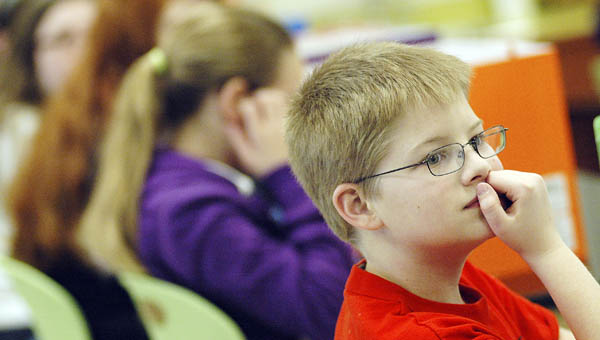 Ironton student Dylon Herrman waits for the start of the Eddy Test Thursday at the Ironton Middle School. Thirty-seven sixth grade students from both Ironton Middle and Lawrence Elementary schools were eligible for this year’s test that is sponsored by the Child Welfare Club.

When he was in sixth grade, it meant a brand new bike. That’s what Mark McCown’s parents got him when he became part of the crème de la crème of Ironton students.

Now as an established city attorney, McCown looks at the day he became an Eddy Award winner in a different perspective. For McCown the test and its ensuing accolades are a way to foster a lifelong love of learning and promote academic achievement.

“In today’s age where there is so much emphasis placed on the ability to obtain information at the push of a button, it is still important to recognize people who sit down and reason out the decisions over which they are faced and to encourage that ability in youth,” he said.

Mary Beth Nenni was another sixth grader who gained recognition by becoming an Eddy Test winner. Like McCown, Nenni sees the Eddy making a significant contribution to Ironton education.

“Kids go out and excel in sports and get awards,” she said. “It is a good thing for the same to happen with academics.”

This winter marks the 50th anniversary of the test that rewards the top sixth graders in the city. It’s the Eddy Awards and it is one of the best-known contributions of the Child Welfare Club, a group of women who for nine decades have focused their energies, talents and time on the youth of Ironton.

It was Mrs. Carl Moulton who first brought to the attention of the women of Ironton a Chicago-based organization called the Child Conversation League. That was in January of 1919. She went to some of her friends and asked if they could form a comparable civic organization whose charter stated the purpose of the club was “to provide for physical, intellectual and moral purity, health and strength of childhood and youth and to promote their welfare.”

Their first meeting of what was then called the Child Study Group was on Feb. 14, 1919. That winter the members formally changed the name of the group to the Child Welfare Club and became a member of the state and national Federated Women’s Club.

The club’s first project was starting a story hour for children from 4 to 14 years of age. Next came the Milk Fund to provide that nutritious beverage for youngsters in need.

But it was in 1961 that the Child Welfare Club began the project that today is still considered one of its most prestigious — the Educational Achievement Awards, now known by its nickname, the Eddy Awards.

Each year the top 25 percent of all sixth grade students are chosen to take the standardized test that covers reading, arithmetic, English literature, history, geography, science and spelling.

Then those students scoring in the top one-third percentile are chosen winners of the Eddy Awards.

Ella Lawless was in that first class of winners and still remembers how important the Eddy was.

“It was really a big deal for us,” Lawless said. “It was the first time and you were awarded for your smarts and back then no one was awarded for their smarts. It gives the kids something to look forward to doing. Their education is important and it gives them something to strive for. The Eddy is wonderful.”

There were 31 winners that first year and on May 12, they will share the stage with the 2011 champions at the spring banquet where honors will be given out as the Eddy’s go forward for the next 50 years.