Board of DD set for awareness month 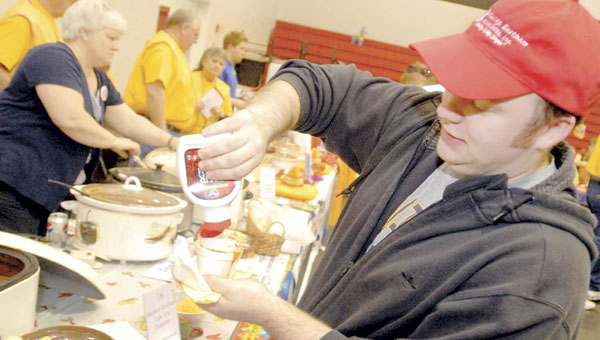 Chris Beaver doctors his chili with a little sour cream as he enjoys various versions.

With more than 500 children and adults in the county with developmental disabilities, The Lawrence County Board of Developmental Disabilities is hoping the community will come together next month for DD Awareness Month.

And this year’s theme just so happens to be “together.”

“This year’s theme of ‘together’ really catches the essence of what we try to accomplish with DD Awareness Month,” said Paul Mollett, superintendent. “By bringing people and organizations of the community together with the DD population, we can accomplish the immense task of having fun and enjoying our community as a whole.”

To kick off the month, there will be a balloon launch at the Open Door School on Lorain Street in Ironton. At 10 a.m. on March 1, 100 balloons, each attached with the name of a child at the school and the school’s address, will be released. If someone finds the tag with a student’s name on it, they are encouraged to write a letter and send it to the school.

On March 2, the Open Door School will celebrate Dr. Suess’ birthday with readings and a lunch of green eggs and ham.

“We like to try and have members of the community come out and read,” said Tim Nunnery, public relations director of the LCBDD. “We’re looking to see what we can do about getting maybe a couple of doctors or medical staff from around the area to come out this year.”

For a $25 entry fee, participants can bring their crafts to sell or bring in their homemade chili for a chance at bragging rights and a trophy.

Bill Cornwell, news director for Clear Channel Radio, will be among the judges for this year’s Chili Fest.

The Chili Fest and Craft Show will be on March 12, but not until after the inaugural 5K Run/Walk for DD Awareness Month. Registration is $15 in advance or $20 the day of the race.

The race will begin and end at the Dawson-Bryant track and prizes will be awarded to winners of various groups. “We’re happy that we’ve made Chili Fest a staple in Lawrence County and have gotten local organizations to participate,” said Nunnery. “We’re hoping to include the run and appeal to more community members by having them participate in a whole new manner.”

Also on the bill for the month will be March Madness basketball games.

They will be held on March 22 in the Dawson-Bryant High School gym starting at 6 p.m.

Throughout the community, the LCBDD will also be setting up food drive and eyeglass collections at various businesses.

Nunnery said he hopes everyone will come out and support the county’s DD population because they are a big part of the community.

“They are no different than you or I, and that’s just a good way to think about it,” he said. “We’re really hoping for everything to be a success for us this year, and that all depends on our community getting involved, which I’m certain they will do so, considering the cause.”

If you are looking for something to spice up your next dinner party, gathering or an evening with your significant... read more