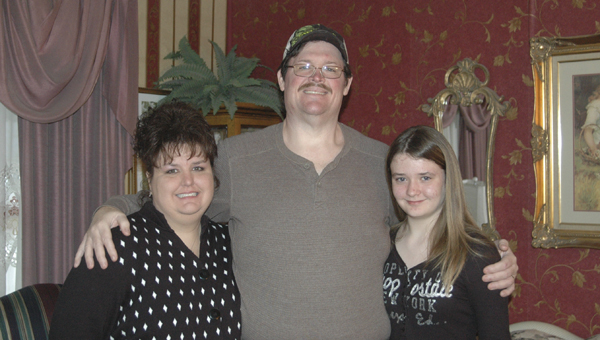 Angela Watson (left) and her daughter, Brooke Gilliam (right) used quick thinking to perform the Heimlich maneuver on James Watson (center) to dislodge a piece of chicken that nearly cost him his life last Sunday.

It was a Sunday evening and James Watson was engaged in a pastime of watching old Andy Griffith Show reruns in the bedroom of his Ironton home.

He was alone and beginning to eat his supper, takeout from a local restaurant. Taking a bite of a crispy leg, Watson began to choke.

Unable to breathe, the 42-year-old rushed into the living room, hands around his throat, to alert his wife, Angela. Seeing only his 11-year-old stepdaughter, Brooke Gilliam, he flew to the kitchen.

“I’m losing it. I’m started to black out because I can’t breathe,” Watson recounted. “Everything’s getting fuzzy. It’s getting dark.”

Angela, trained in the Heimlich maneuver from her 15 years as a dental assistant, jumped into action — literally.

The 5-foot-2 woman , a full foot and one inch shorter than Watson himself, jumped up onto a kitchen chair and wrapped her arms around him.

“My arms were too short to reach all the way around him so I yelled for my daughter,” Angela recalled. Brooke rushed to the kitchen and to the rescue.

“Angela tells her, ‘push on him right here, push hard, push hard, he’s dying, push hard,’” Watson said. “She starts pushing with everything she’s got, literally almost hitting me, you know. Angela was pulling in and Brooke was pushing.”

Finally, the piece of chicken leg was dislodged from Watson’s throat. Watson, nearly in tears, grabbed hold of a chair to keep from collapsing.

“They didn’t panic,” Watson said. “If they hadn’t gotten me unchoked, I don’t know what would have happened.” Watson, who said he knew the Heimlich maneuver, said, “It’s a different situation when you’re the one choking.”

“I’m the man. I’m 42 years old. I’m supposed to be there and look after my wife and protect my children. And they’re the two who saved me,” Watson said. “Here’s my wife, she has to stand up in a chair because she’s so much shorter than me. And then here comes my daughter. She isn’t any bigger than a peanut.”

“I really didn’t know what was going on,” Brooke said of the incident. “Then I came in (the kitchen) and Mom told me.” The sixth grader said she was a little scared when she found out Watson was choking.

“She did exactly what I told her to do and it worked,” Angela said proudly. “If she hadn’t been here, I couldn’t have got my arm around him. I was trying and trying and I couldn’t. I don’t think she realized the extent of what she did until after the fact.”

Since the frightening experience, the couple said they have taught Brooke how to perform the Heimlich maneuver.

“I think they should be teaching it in schools, because a lot of the kids have younger siblings,” Angela said. “I definitely think they need to learn this. I think sixth grade is a good age to learn.”

Watson, who said he may not be eating chicken for a while and still gets emotionally choked up over Brooke’s bravery, said, “She has told me I have gone overboard a little bit bragging.”

And about saving her stepfather’s life, Brooke said, “It feels pretty good.”

Twenty others tabbed by local grand jury An Ironton man who allegedly robbed a bank has been indicted on charges... read more