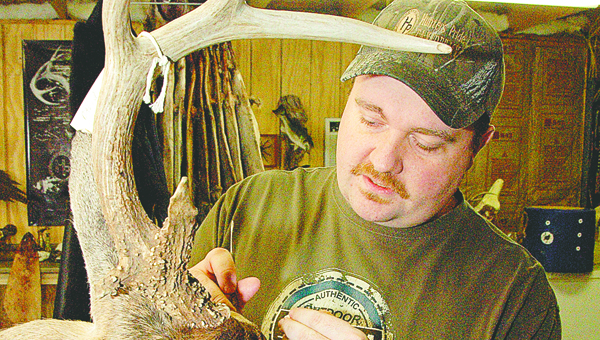 In a white two-car garage along State Route 243 in Deering, Brandon Hitchcock has a place to let his artistic side shine. It’s not a studio; it’s a workshop and his medium of choice is not oil paint or watercolor, but God’s creatures.

Hitchcock is the owner and operator of Hunters Pride Taxidermy. He has worked in the profession for the past 15-plus years.

“(Taxidermy) works out great if you have any artistic ability at all,” Hitchcock said.

The artistic part of his job involves positioning the animals in natural ways. Hunters want to remember their prizes just the way they were when they shot them. It’s his job to make sure the animals are in just the right poses.

“The goal of any taxidermist is we’re trying to recreate what God’s already made,” he said.

Among his current projects is a diorama of an African lion and a warthog.

“There’s a lot of things to consider when you’re trying to make a piece like that,” he said.

For instance, space. The customer had originally sketched out a scene that would have required an area of 16 by 5 feet. Hitchcock revised it and came up with a scene that will only require 6 by 4 feet and still display the animals interacting with one another. The animals themselves are another consideration. While a taxidermist typically takes a mannequin of the animal and covers it with real hide, custom pieces like this one require modification.

“You’ve got to know how to cut the basic mannequin apart and put them back together to display what you’re trying to do,” Hitchcock said. “That’s the difference between an amateur and a professional.”

To get the scene around the creatures just right, Hitchcock will use pictures of the natural African habitat. While he is a skilled taxidermist, it helps that he has always had a knack for the artistic. He learned to draw with his grandfather’s help and was frequently called on in school to make banners and signs for sporting events and other activities.

Though he grew up hunting, Hitchcock never gave any thought to taxidermy until a water fowl hunting trip with a friend during which he shot a Canada goose. His friend suggested he have it stuffed.

“So we went to this taxidermist,” Hitchcock said. “I walked in and I was just hooked. It’s the best of both worlds. I like the hunting, I love animals, and the art side of it just kind of comes together.”

Hitchcock has been a taxidermist ever since. An employee of Sunoco Chemicals, the husband and father balances a full-time job with his passion for taxidermy.

It’s a source of pride for Hitchcock that his profession dates back thousands of years to when people hunted their food and tanned the skins.

“People had to put clothes on themselves, they had to feed themselves,” Hitchcock said. “Cavemen were drawing pictures of buffalo and deer on the wall because they were impressed by the animals. Anytime they went on a hunt or did battle with one they put it on the wall, and we’re putting deer heads on the wall. So it’s not changed in how many thousands of years.”

Hitchcock is in the process of converting the first floor of his workshop into a showroom to show off his work. The work area will be moved to the top floor.

Hitchcock also has dreams of one day expanding the business to a larger location where he can offer local jobs. He has a client base of hunters all over the Tri-State and throughout the country.

“I want to find another building because the volume is there,” Hitchcock said.

Besides his commercial work, Hitchcock also competes in taxidermy competitions. Last year he won a state competition for a pheasant he worked on.

“I never competed until last year and I was kind of happy I won second place,” he said.