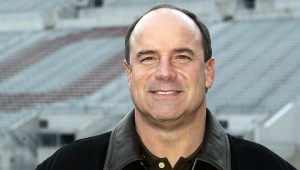 Art Schlichter, who led Ohio State to an undefeated regular season in 1979, is the target of an investigation by local and federal authorities centering on a sports-ticket scheme that has swindled numerous people out of several million dollars, according to a source familiar with the matter. (MCT DIRECT PHOTO)

COLUMBUS — Former Ohio State quarterback Art Schlichter, already known as one of the nation’s most-notorious compulsive gamblers, is the target of an investigation by Columbus and federal authorities centering on a sports-ticket scheme that has swindled numerous people out of several million dollars, according to the Columbus Dispatch.

Sources said Schlichter began soliciting people for money as part of an “investment opportunity” involving brokering and selling tickets for Ohio State football games and other prominent sporting events about two years ago.

The money collected by Schlichter was being used to gamble and make larger bets reportedly as much as six figures.

Since 1994, Schlichter has served time in 44 prisons or jails, mainly for fraud and forgery to feed his addiction to gambling on sports.

Schlichter led Ohio State to an unbeaten regular season as a freshman in 1979 before losing 16-14 in the Rose Bowl to Southern Cal.

Schlichter was the fourth overall pick in the 1982 NFL draft by the Baltimore Colts but his career was considered a bust.

He threw for just 1,006 yards, three touchdowns and 11 interceptions with the Colts and Buffalo Bills.

His book “Busted” was released last year and detailed his gambling addiction that cost him his career, friendships, legacy, marriage and relationship with his daughters.

After losing to Michigan again, Ohio State tries to move on