Buckeyes say loss won’t have effect on them 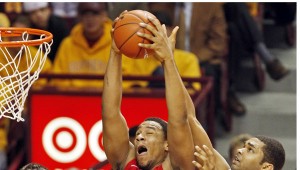 Ohio State's Jared Sullinger (0) said he was spat on by a fan during the Buckeyes loss at Wisconsin last Saturday. The Buckeyes fell from their No. 1 ranking but vowed that the loss won’t have any lasting effect on them. (MCT DIRECT PHOTO)

COLUMBUS — Although the Ohio State Buckeyes are no longer unbeaten, they want everyone to know they’re not down or embarrassed or obsessing over their only defeat.

As a matter of fact, shooting guard Jon Diebler sounded a note of defiance as Ohio State prepares for a quick turnaround game on Tuesday night at home against Michigan State.

“We didn’t come into the season trying to go undefeated. Obviously, it would have been nice. But we’re still two games up on second place in the Big Ten. And that’s our first goal — to win the Big Ten,” Diebler said, referring to Saturday’s 71-67 loss at then-No. 13 Wisconsin.

“Yes, we lost. Yes, it’s not acceptable to lose. But it’s not the end of the world. We still have six games left and we’re sitting in a pretty good position right now.”

The dreams of recreating what the 1976 Indiana Hoosiers did — the most recent Division I-A team to go through a season unbeaten — were vaporized by the Badgers’ scalding shooting in the second half.

Now Ohio State, which dropped a spot to No. 2 this week, are faced with one of the biggest games every year on their schedule.

And the Spartans (14-10, 6-6) would like nothing better than a win that would make a lot of people forget about a season that’s been a struggle.

Asked about a game that many think his team cannot win, coach Tom Izzo smiled.

Even though his team has been beaten up, hampered by injuries and doubted by many, Izzo said Ohio State provides a chance to erase a lot of bad memories.

“You have a chance to get back to restore the roar,” said Izzo, who is concerned that swingman Delvon Roe might be held out of the game with a knee injury.

The Buckeyes have said all season they’re far more concerned about their own play than they are about the opponent. This game might be the truest test of that approach.

“It’s uncharted waters — it’s kind of embarrassing to say that — but, we’ll find out,” coach Thad Matta said of his team’s ability to forget the loss. “I’m anxious to see tomorrow night how we come out and play. But they’ve given me no signs. We’ll get ready to go in and get after it again today (in practice). I think they’ll respond; that’s who they are.”

William Buford, who led the Buckeyes with 21 points on Saturday, said the team has never made a big deal out of going unbeaten. So losing a game and losing that opportunity isn’t a huge problem.

“To be honest, we never really talked about our record or even brought it up as a team,” he said. “We never felt any pressure at all. We’ll just go out there and play our hearts out and follow our game plan.”

Diebler said the team’s four veteran starters would make a point of stressing that almost every goal of the team is still alive.

“You can’t pout about losses,” he said. “When you start doing that, then things start happening that shouldn’t with a team. We weren’t excited about losing; if we had a choice, we would have loved to win every single game we played. But we didn’t. Like our mentality has been every year, even coming after wins, it’s ’Who do we play next? Who’s the next game?”’