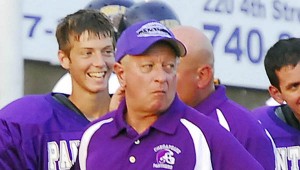 Phil Davis has coached football, track and wrestling at Chesapeake for the past 22 years. Davis is retiring after 39 seasons of coaching. (The Ironton Tribune / Kent Sanborn of Southern Ohio Sports Photos.com)

CHESAPEAKE — When the final seconds ticked off the clock in the final game of the season, the Chesapeake Panthers had a 25-22 upset win over the Coal Grove Hornets and an Ohio Valley Conference championship.

After 39 seasons as an assistant and head football coach, Davis has decided to put his playbook away and hang up his whistle.

“It was tough. It wasn’t because I was tired. I still enjoy it. But it’s time,” said Davis. “You reach a certain point. It has to deal with age, the retirement system, a lot of stuff. You have to think of those things at some point,” said Davis who turns 65 next month.

“It’s been 34 years of 12-hour days and those are the short days. You might think that should be enough, but I’ve enjoyed every minute of it.”

Davis began his career as an assistant at Buffalo (W.Va.) High School in 1972. He later served as the Bisons head coach for 12 years compiling an 81-35 record. Despite his success at Buffalo, Davis decided to chase the job at Chesapeake.

Leaving a good job at Buffalo might have looked crazy to others considering the Panthers previous three seasons had produced records of 2-8, 1-9 and 0-10.

“I’ve always felt there were two kinds of coaches. You take over a program that’s not doing well and it does better but the schedule gets tougher because of your success and then you go somewhere else,” said David.

“Then there are those (coaches) that hang around because they feel a loyalty to their kids and you hope there’s some loyalty the other way. You build something and maintain it. I wasn’t looking to change jobs the first time, but it was an opportunity I couldn’t pass up. I knew it would be a struggle.”

In 22 years at Chesapeake, Davis posted a 126-104 record to give him an overall record of 207-139. His teams won eight Ohio Valley Conference titles — the school has won 11 overall — and the Panthers qualified for the postseason seven times.

Davis had decided to retire before last season but didn’t tell his players until a few weeks ago. He said it was hard to leave the current group, but that would always be the case.

“I didn’t want to have any regrets. I always said if there was a time when I didn’t want to go to practice, it was time to go. I never reached that point. It just seemed to be the right time,” said Davis.

Davis is a dinosaur in terms of coaching more than one sport. He is also the Panthers head coach in wrestling and track. Coaching year-round has disappeared during the past 25 to 30 years.

Under Davis, the Panthers have had a solid wrestling program and the track team had an 18-year period where they sent at least one player to the state meet.

“I wanted us to be good at everything. I wanted all the programs to be good and the three I had control of I had pride in and I think we’ve been fairly successful,” said Davis.

But Davis isn’t about to take credit for all the success. Just like football, it takes a total team effort.

“You can’t do it by yourself. I’ve been real lucky there, too. I’ve had good guys who are loyal and do a good job. I’ve had three great principals and some great athletic directors. Administration here in the school was always trying to be helpful,” said Davis.

Davis said he couldn’t have been involved in three sports had it not been for Helen, his wife of 43 years.

“My wife has been wonderful the whole time. We may have problems now that I’ll be around the house more,” Davis said with a laugh.

Actually, Davis said he is looking forward to traveling with his wife to visit their three children and their grandkids.

Son Scott is a doctor who lives in Proctorville while son Brian lives in Hampton, Va., and is a structural engineer. His daughter, Gina, is a dentist in Charlotte, N.C.

“Two of our kids aren’t close and we don’t see them much. Scott is close, but we don’t see him that much and that has a lot to do with my schedule,” said Davis.

Regardless of the travel and the schedule restrictions, Davis said he wouldn’t have taken any other path through life.

“I have zero regrets. I’ve had the most enjoyable job anyone could have,” said Davis.

And the clock continues to wind down.

By JIM WALKER Tribune Sports Editor ALBANY — They’re off and running. No, this wasn’t the start of a horse... read more