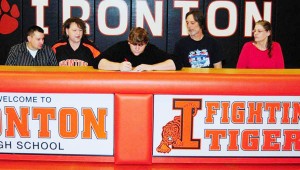 All throughout his playing career, Brad Spoljaric has played along side of Robbie Webb.

After signing a letter-of-intent Thursday to play at Kentucky Christian University, that partnership is continuing.

Spoljaric signed with the same program Webb inked with just two weeks ago after the two have been standout linemen for the Ironton Fighting Tigers the past three years.

Their friendship actually led to Spoljaric signing with the Knights. New KCU head coach Mike Furrey was visiting Webb’s home and was told Spoljaric had not signed with any college.

Spoljaric spurned an offer from Malone College and passed on an offer as a preferred walk-on at Marshall University.

“Robbie called me and said coach Furrey was at his home and wanted to know if I wanted to talk to him. We talked and I visited the school and I liked it. I wanted to stay close to home,” said Spoljaric.

The 6-foot-4, 275-pound two-way lineman was a three-year starter for the Fighting Tigers. He was a first team Division IV All-Southeast District selection this past season and was named second team All-Ohio on defense.

Ironton was 10-3 in each of the past two seasons and reached the regional finals each year. The Fighting Tigers were 8-4 and regional semifinals his sophomore season.

Spoljaric is expected to play either defensive end or tackle.

“I said I’ll play wherever. I’d rather play defense. On offense you push people around. On defense you get to hit,” said Spoljaric with a grin.

Furrey took the KCU head coaching position after a professional career first in the XFL, the Arena Football League and then with St. Louis, Detroit, Cleveland and Washington in the NFL.

Spoljaric said it will be beneficial to play for Furrey.

“I was surprised that he was in the NFL. He was meeting with some players and I listened to him talk. I can learn a lot from him,” said Spoljaric.

While Spoljaric thinks he can learn from Furrey, he said his experience playing at Ironton under coach Bob Lutz has him well-prepared for the college level.

Playing at the next level wasn’t something that Spoljaric had on his agenda early.

“My freshman and sophomore years I didn’t think about it much, but my junior and senior years I began to think it was something I’d like to do,” said Spoljaric.

St. Joseph Flyers’ T.J. Young win the battle for a rebound against a Raceland defender during the Flyers’ 59-43 senior... read more