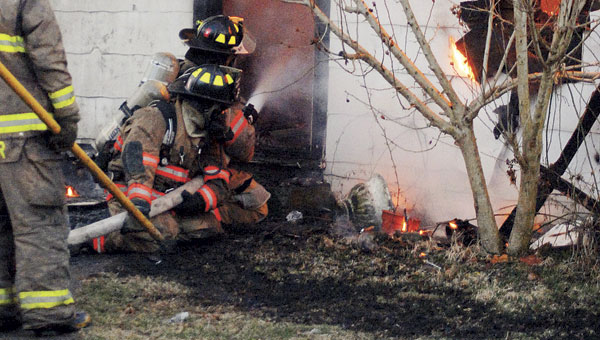 Firefighters from the Fayette and South Point departments work to contain a structure fire at Ashley Court in South Point Saturday evening. The house was unoccupied at the time of the fire. SOUTH POINT FIRE 2 THE TRIBUNE/JESSICA ST JAMES Volunteer fire fighters are seen working the scene of a structure fire of an unoccupied house Saturday evening at Ashley Court in South Point. It was undetermined at the time how the fire started.

SOUTH POINT — No injuries were reported after a vacant house in South Point burned Saturday evening.

South Point Fire Chief Richard Stevens, who was among the first on the scene at the Ashley Court house, said the residence was fully engulfed when he arrived. The call came in around 5:30 p.m.

The cause of the fire has not been determined.

The Ohio Division of State Fire Marshal has been called in to investigate the fire, which is standard procedure when the cause cannot be determined right away, Stevens said.

Approximately 20 firefighters from South Point and Fayette Township fire departments were on the scene, Stevens said.

HUNTINGTON, W.Va. — St. Mary’s Medical Center is going tobacco-free on June 27. After this date, no tobacco use of... read more