Protesters march to save Ashland P.O. 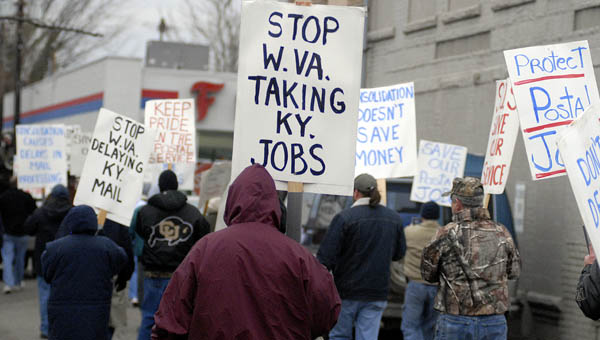 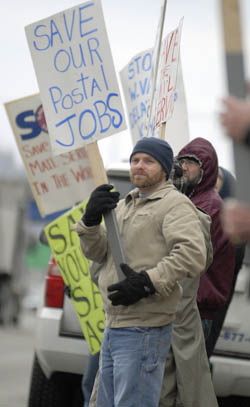 Don Stokley, clerk for the Ashland Post Office, is seen with other protesters.

ASHLAND, Ky. — They waited around for about a half hour but the officials a band of protesters wanted to meet didn’t show.

At noon Friday about 30 postal workers and concerned citizens, including two Ashland City commissioners, marched to the federal building on Greenup Avenue to protest the possible closing of the processing plant of the Ashland Post Office.

Earlier this year the U.S. Postal Service said it was considering a proposal to move the processing section of the Ashland operation to Charleston, W.Va. That could eliminate 43 local jobs.

Opponents say that move would cause mail delivery to be slowed down to two-to four-day service.

“I know a lot of Ironton people who use our mail service,” said Dave Dunkle, acting president of the KYOWVA Local that represents the processing workers, before the march.

“Yours is sent to Columbus,” he said. “A lot of Ironton people bring and dump their mail in our boxes. We get it to you overnight. If this goes out of here, you won’t have businesses wanting to come here, once they find out about the mail delays.”

A few months ago, the postal service shut down the processing plant at the Huntington, W.Va., office, sending that mail to Charleston. Right now the Ashland office that serves Eastern Kentucky has the only processing plant in the Tri-State.

The protesters gathered behind the Bob Evans restaurant in 34-degree blustery weather to get ready to make the five-block walk down to the federal building.

Handmade signs were passed out to those who braved the winter temperatures. Sign slogans ranged from “Save Your Mail… Save Ashland,” to “Protect Our Jobs… Protect Our Community” to “Stop PMS: Postal Moronic Stupidity.”

Newly elected Ashland commissioner Tom Cantrell as well as veteran commissioner Larry Brown joined the marchers as they lined up before the walk.

“I think we need to protect the mail service here in Ashland,” Cantrell said. “It is needed to get business in here.”

Rick Shilling has worked in the Ashland processing section since 1993 and has been with the postal service for 36 years.

“I don’t think this is right,” he said. “Ashland has been losing jobs left and right. Now they are going after ours. Change isn’t always for the best.”

Ray Lyons works at the other end of the postal service spectrum as a letter carrier. Already with the closing of the Huntington operation, he has had complaints from residents on his routes about delays.

“It is taking three to five days to get mail from Huntington down here,” Lyons said.

Around noon a man, who declined to give his name to members of the press and was dressed in camouflage gear, grabbed a bullhorn and addressed the marchers.

“Ninety percent of this work is done in three different shifts after hours,” he said. “We have high-speed machines, the same as at Charleston, W.Va. We have been doing this for years and years. We work hard.”

In less than five minutes, the marchers arrived at the federal building where they lined up on the public sidewalk waving their placards to the four-lane Greenup Avenue traffic. Car and truck horns often blasted showing their endorsement of the protest. And three women from a second-floor business across the street opened their window to wave a homemade sign in support.

However not once during the half-hour protest did the doors of the federal building open with anyone responding to the crowd.

“I was hoping there would be someone to meet us at the federal building,” Dunkle told the crowd. “You would think that (U.S. Rep.) Geoff Davis, (U.S. Sen.) Mitch McConnell and (U.S. Sen.) Rand Paul would care. … I see no one from our Republican administration. Apparently they don’t care. I hope you go home and write your Congressmen. We need them to do something about this.”

HUNTINGTON, W.Va. — Global Law Experts, one of the premier guides to leading attorneys throughout the world, recently announced that... read more