PORTSMOUTH — Andrea Werner, a senior at Shawnee State University and president of the Shawnee Student Veteran’s Association (SSVA), has become the first woman elected to an official position in the national organization, Student Veterans of America (SVA).

Last summer, Werner was named the first national director of Women Veterans Initiatives and Advocacy for SVA. Because of her involvement, she has been serving on the Advisory Committee for Women Veterans in the state of Ohio and she appeared in a documentary on women and violence in the military. 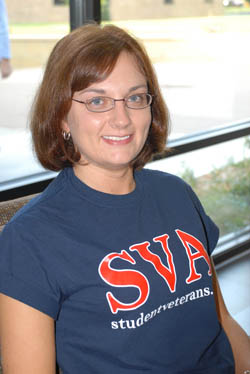 “It is so surreal to me because I started out beginning a chapter here on campus and within a short time, I was elected to the national board,” Werner said.

Werner has several statewide conferences to attend where she will be a special guest speaker, in Pennsylvania and Texas and she will be serving on a panel for the American Legion in Washington, D.C.

She also will present at a leadership conference in Madison, Wisconsin, in June.

“My goal is to get the information out there and find out what women veterans’ needs are,” Werner said. “That’s my main reason for going. They have someone who will listen to their needs and work with them to address women veterans’ issues on campuses.”

Werner also was accepted into a fellowship program, The Mission Continues, where she is doing a project for women veterans for seven months.

Another project she has been invited to participate in involves an artist in California who is taking women veterans’ portraits. She has invited about 75 women veterans, taking photos and putting their stories with the photos for an exhibit in California. Then she will compile them into a book.

“It’s a very exciting time for all of us,” Werner said. “I’m anxious to see what’s going to happen in the next couple of years with treatment and services provided, and just recognition for women veterans.”

David Thoroughman was sworn in by Portsmouth Municipal Court Judge Steven L. Mowery in front of an audience that included... read more