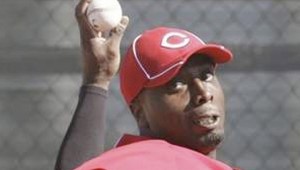 Dontrelle Willis is attempting to make the Cincinnati Reds’ roster this spring training in a comeback bid. (MCT DIRECT)

GOODYEAR, Ariz. — Dontrelle Willis had just been dumped from his seventh team in two seasons. Still in his 20s, the left-hander once known as “D-Train” looked to be headed for the scrap heap.

An old acquaintance provided another chance.

Reds manager Dusty Baker called to check up on Willis, who couldn’t get batters out in the majors or the minors last season. Baker’s wife knew Willis when he was a child, forging an extended-family bond. When the NL Central champions were ousted from the playoffs, Baker began thinking about next year.

He thought about Willis.

“He just told me he wanted me to come play for him,” Willis said Friday. “It was pretty straightforward. I was congratulating him on a great season and the turnaround by the Reds, and he basically said, ’Be quiet. We want you.’

Even though Willis has been a starter his entire career, he agreed to a minor league deal with a chance to win a spot in Cincinnati’s bullpen.

What better choice did he have?

The 29-year-old pitcher has struggled for the last few years, giving up a lot of runs wherever he goes. It’s been a sudden and sharp drop-off for a career that started a stir.

Willis had a sensational debut with Florida in 2003, when he won the NL Rookie of the Year award and led the Marlins to a World Series championship under manager Jack McKeon. He led the league with 22 wins in 2005. He has 25 total wins since then in the majors.

He had two knee injuries with Detroit in 2008. He missed most of the 2009 season with an anxiety disorder. Last season, he pitched nine games with the Tigers, was traded to Arizona, got released, signed a minor league deal with San Francisco and went 0-1 for two Giants farm teams.

The harder he tried to revive his career, the worse it got.

“I just need to have fun,” he said. “Sometimes when you struggle, you kind of feel like you’re in quicksand. The harder you fight, the worse it gets. Sometimes you have to take a step back and just enjoy the game in its simplest form and not get too complex.”

But, would he get another chance?

Baker had been following his career, in part because of the family ties.

“My wife grew up with Dontrelle’s mother and aunt in San Francisco,” Baker said.

While watching young Reds players at the Arizona Fall League, Baker talked to a Tigers scout about Willis. The scouting report was good. Baker decided to give him a call.

“That’s what I’ve probably been best at in my career, giving guys an opportunity to excel without bringing their past into the present even though I’m aware of what their past is.”

Willis’ options with the Reds are limited heading into spring training. Cincinnati already has more starters than spots in the rotation. It’s satisfied with right-hander Nick Masset and left-hander Aroldis Chapman filling setup roles to get to closer Francisco Cordero.

Barring injury that opens another spot, he’ll have a chance to make the team as a middle reliever. That’s fine with Willis, who is grateful for the chance.

“They just want me to be me,” Willis said. “That’s refreshing to hear, especially with my past struggles. Trying to grind it out and play harder was not working out. They said, ’We just want you to downshift and play baseball and have fun.’

“So I’m indebted to them for that.”