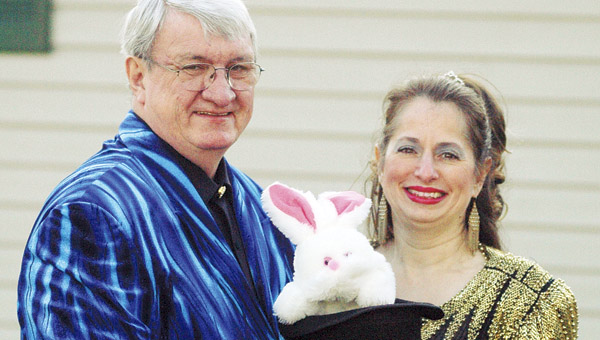 Mark Irwin, pictured with his wife and assistant Doris, of Proctorville, has been using magic since the early 90s to help explain the Bible to children.

PROCTORVILLE — It’s a slight of hand with a serious message. That’s the mission behind Majestic Ministries that brings what Mark Irwin calls biblical truths to others.

Almost 20 years ago Irwin, an ordained independent Baptist minister from Proctorville, was visiting friends with his wife and two young children. He was fascinated by the way the son of their friends could enthrall his children by teaching Bible stories through magic.

“When I first saw how he had the attention of the children and how captive their minds were to what he was saying,” Irwin said. “My being a youth minister at the time, I thought that was a very unique way to explain a Bible story and the kids gave 100 percent of their attention to him.”

That afternoon inspired Irwin to find any and every way to study the tricks of the trade of the magician, going to conferences and lectures and absorbing the lessons from DVDs and books on the subject.

He also learned that it takes more than just making sure the hand can move faster than the eye can comprehend.

“Learning to do a trick doesn’t make you a magician,” Irwin said. “A large portion is in your presentation, in your patter. What you are saying as you are working.”

When he felt he had sufficient proficiency, he ventured out with his ministry that he, with his wife Doris, takes to church youth groups, birthday parties, any venue where he can get the Word of God out.

Among the biblical references he illustrates with his tricks are the stories of Jesus Christ dying on the cross with the two thieves and Jesus being raised from the tomb as well as what qualifies one to go to heaven.

Congressman Bill Johnson plans to have an office in Ironton. A spokesperson from his office confirmed Thursday that the congressman... read more