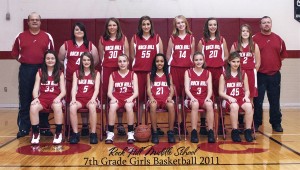 The Redwomen lost four of their first five games but rallied to win eight straight over one stretch and finished 10-6 including 8-2 in the OVC to share the regular season title with Fairland.

“This team really came together and played hard until the end,” said Redwomen coach Joe Bokovitz.