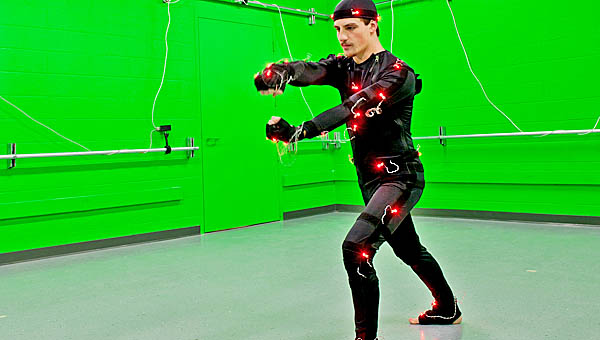 Christopher Jugler, a junior in the Digital Simulation and Game Engineering program at Shawnee State University, demonstrates the use of motion capture in the Advanced Technology Center’s Motion Capture Room at the university.

PORTSMOUTH — Shawnee State University in Portsmouth has earned an Honorable Mention on The Princeton Review’s second annual list saluting the best undergraduate schools in the U.S. and Canada to study video game design.

Compiled by The Princeton Review, one of America’s best-known education services companies, the list, “Top Schools for Video Game Design Study for 2011,” salutes 30 institutions in all (15 undergraduate and 15 graduate) for their outstanding game design education programs.

“We have two very strong gaming programs at Shawnee State University, one in the arts and one in engineering with game development/programming,” Jason Witherell, assistant professor in the SSU industrial and engineering technology department, said. “Having two complementary degrees seems to be what all of the top 10 schools on the Princeton Review have in common. Having a state-of-the-art motion capture lab probably didn’t hurt either.”

Witherell explained that the program at Shawnee State University has had much success and has continually grown. In December 2010, the Ohio Board of Regents recognized Shawnee State as a Center of Excellence in Immersive Technology, which includes the digital simulation and gaming programs, SSU’s Motion Capture Studio, and developing Immersive Technology and Arts Commercial Center.

“We’ve been in the game business longer than most other schools,” he said. “Most schools that do teach gaming tend to focus on one area – either all fine arts or all programming – but rarely do they have students from both disciplines. Both of our majors also have a significant amount of game design content (coming up with ideas for games) and include a lot of team-based projects.”

The Princeton Review developed its “Top Schools for Video Game Design Study” list in 2009-2010 in partnership with GamePro, one of the most respected brands in the video game industry, reaching over three million gamers a month.

The list for 2011 names 10 undergraduate and 10 graduate schools in ranked order No. 1 to 10. Five schools in each group are recognized as Honorable Mentions. Reported in the April GamePro magazine, the list is also accessible on the websites of The Princeton Review at www.princetonreview.com/game-design-press-release.aspx.

The Princeton Review chose the schools based on a survey of administrators at 150 institutions offering video game design coursework and/or degrees in the United States and Canada.

“We’re proud of what we offer students and think it’s incredible to be in such good company on this list,” said Greg Lyons, chairperson, department of fine, digital & performing Arts and associate professor of 3D design and animation. “We’re also proud of our students who go on and make a name for themselves in this industry. We have some outstanding students who truly are doing some incredible things in the gaming world. That’s what brings us the most pride.”

Conducted during the 2010-11 academic year, the Princeton Review survey included more than 50 questions. Topics ranged from academics, curriculum and faculty credentials to graduates’ employment and career achievements. School selections were based on a comprehensive analysis of data that analyzed the quality of the curriculum, faculty, facilities and infrastructure, plus the school’s scholarships, financial aid and career services.

“It has long been our mission to help students find – and get into the schools best for them to pursue their interests and develop their talents,” said Robert Franek, Princeton Review Senior VP/Publisher. “For the burgeoning number of students aspiring to become game designers, we highly recommend Shawnee State University as one of the best and most innovate places to study and succeed in this exciting field. We also salute the faculty and administrators at Shawnee State for their extraordinary programs and commitment to students.”

The Princeton Review’s “Top Undergraduate Schools for Video Game Design Study for 2011” are: