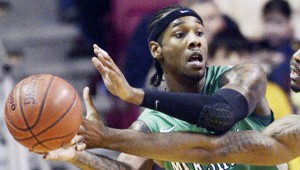 Marshall’s DeAndre Kane (24) looks to pass to a teammate while being tightly guarded. The Herd lost 77-65 to UTEP on Thursday in the quarterfinals of the Conference USA tournament.(The Ironton Tribune / Courtesy of Marshall University)

EL PASO, Texas — UTEP took a 23-point lead in the first half and cruised to a 77-65 win over the Marshall Thundering Herd in the quarterfinals of the Conference USA Championships at the Don Haskins Center.

Marshall (22-11, 9-7 C-USA) opened the second half on a 14-3 run to get within seven points, but the Miners were able to hold their advantage and advance to Friday’s semifinals.

Johnny Thomas led the Herd early on, scoring the first five points as Marshall would open up a 5-2 advantage in the opening two minutes.

UTEP countered with 10 unanswered points of their own to rally for a 12-5 edge. A basket by Damier Pitts at the 15:12 mark put an end to the run.

UTEP also put up 13 straight points over that stretch. With three minutes remaining in the opening stanza, Randy Culpepper, who put 24 points on the Herd last week, hit a long-range three to make it a 44-21 game in favor of the Miners. That marked the largest deficit the Herd has faced this season, the previous high was 22 in the home loss to UAB.

Marshall was able to cut the deficit to 18 in the final minutes of the half as Aundra Williams capped it off with a bucket and free throw.

Williams’ three points to wrap up the first half, coupled with a 9-0 run to start the second half helped Marshall get back within single digits of the Miners. A Thomas’ field goal and free throw four minutes into the final period made it 46-37 in favor of the Miners.

Thomas’ hot hand continued. His second trey of the night with 14:22 remaining made it a 49-42 game before the Miners scored a pair of quick buckets to make it an 11-point game. Their lead would later stretch to as many as 15 points before Marshall closed late in the game.

Leading the way for UTEP was Gabriel McCulley with 14 points. Julyan Stone recorded a double-double with 12 points and 10 rebounds.

Marshall found itself on the small side of the rebounding battle for the first time since losing to UAB on February 9. The Miners outrebounded Marshall by a 40-36 tally. UTEP also finished with a 44.1 to 39 percent shooting advantage and shot 51.4 in the first half.

The Herd will await a potential postseason berth. HerdZone.com will have all information should the Herd be invited to postseason play.