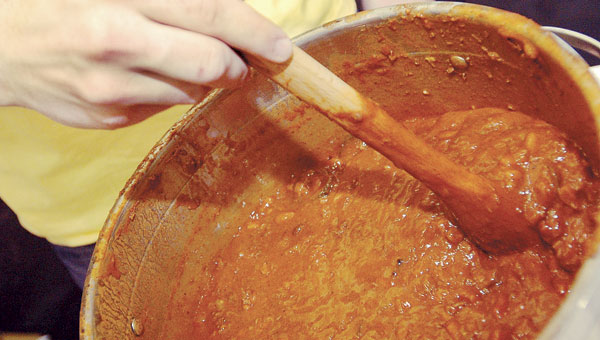 Tables are lined up as participants spice things up at the annual Chili Fest and Craft Show for DD Awareness Saturday at Dawson-Bryant High School. Twenty-five area organizations and businesses participated in the event, bringing with them their homemade concoctions.

COAL GROVE — Nancy Norris of Coal Grove may not have been a judge at this spring’s chili fest to support the Open Door School.

But she and her husband certainly had the right qualifications.

“We spent 17 years in Texas and we know chili,” Norris said.

Her choice? The dish made by the Upper Township Volunteer Fire Department.

“There are no black beans in it, no deer meat, nothing I can’t recognize,” she said. “Doesn’t set me on fire.”

She was just one of a crowd of Tri-State residents who came to Dawson-Bryant High School gym Saturday for the 12th annual event, sponsored by the county board of DD.

The creator of the chili

was J. D. Pancake, a volunteer firefighter, who took his father’s recipe and doctored it up a bit.

There were 25 agencies and businesses that brought their secret recipes to the event as participants lined up to get samples.

This was the first year for Bryan Gilpin, who dished out chili at the Abbott Home Care stand.

“This is a great opportunity,” Gilpin of Chesapeake, said. “You get to raise awareness and eat great chili.”

Laura Brown from the Ironton Department of Health was back for her second year offering a Buffalo Chicken Chili, complete with blue cheese crumbles and tortilla chips.

“Look at all the people involved in this,” Brown said. “And you get to try everybody’s chili.”

The chili fest was preceded by an early morning 5-K run and walk, a first for the DD board, which brought out 245 enthusiasts.

“The race went spectacularly,” Tim Nunnery, spokesman for the DD board, said. “The weather was gorgeous. Couldn’t ask for a better first race.”

The board had considered adding a race to the day’s event for several years.

“We have a base here who likes to run races,” he said. “We figured that would be a great way to raise awareness.”

On March 22 will be the annual basketball game at 6 p.m. at Dawson-Bryant High School between Tri-State Industries and the Media All-Stars.