Formerly of Flatwoods, Ky. he was a resident of South Point, Ohio, for the past 13 years. He was born in Pike County, Ky., a son of the late Willard and Luna Blackburn. He was preceded in death by his first wife of 21 years, Martha Lee Stanley Blackburn. 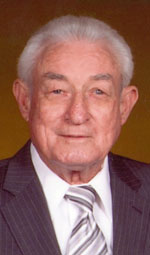 Mr. Blackburn was a U.S. Army veteran during the Korean War. After an honorable discharge he owned and operated Blackburn’s Grocery at the age of 21. This was followed by ownership of Kings Restaurant and Blackburn’s Used Cars in Williamson, W.Va. He retired as a regional sales manager in 1978 from Metropolitan Life Insurance Co. He was a member of Solida Baptist Church, a member of the Masonic Temple No. 890 in Stone, Ky. and an avid outdoorsman and hunter.

He was a wonderful husband, father and grandfather whose family believed there wasn’t anything that he couldn’t do. He will be sadly missed and forever remembered by those whose lives he touched so deeply.

Funeral services will be 11 a.m. Monday, at Schneider-Griffin Funeral Home, Chesapeake, with Pastor Aaron Childers officiating. Burial will follow in Coeburn Point Cemetery, Huddy, Ky., at 2:30 p.m. Visitation will be from 10 to 11 a.m. Monday at the funeral home. Condolences may be expressed to the family at www.schneidergriffin.com.