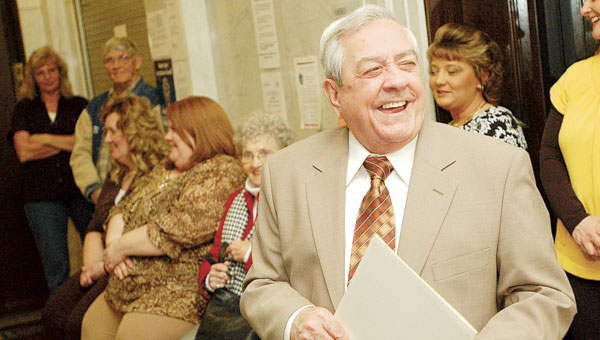 Maybe Ray T. “Moose” Dutey won’t be sitting in the office of county auditor starting next week. But his years as a pub lic servant and friend to Lawrence County will not be forgotten.

And part of keeping that legacy alive came in a tangible form in a plaque that will hang on the marble walls of the Lawrence County Courthouse honoring the man who served the county for more than six decades.

The plaque was unveiled Friday afternoon at a reception for Dutey.

“We are here to honor Moose Dutey for his service,” Commissioner Jason Stephens told friends and colleagues gathered on the second floor of the courthouse by the auditor’s office.

Stephens also presented Dutey with a resolution declaring Friday Ray “Moose” Dutey Day. On Monday Stephens will take over as county auditor after his win in the November general election.

“On March 1948, I started right here in the room where I have my office today,” Dutey told the audience. “I started with a survey crew. I have seen a lot. I’ve made a lot of good friends. People have been good to me and I have tried to repay that.”

Among the tributes came from Gov. John Kasich, whose regional liaison Nick Gatz, presented Dutey with a proclamation.

It cited Dutey’s “proficiency and expertise to your many assignments.”

In the audience was Rep. John Carey, who said he first met Dutey when he worked as an aide for then Rep. Clarence Miller.

“He has always been a good friend of mine,” Carey said. “And he will still be active and be involved.”

Although Dutey is leaving public office, he will remain chair of the county’s Republican party.