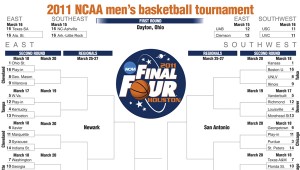 Three more teams in this year’s version of March Madness. Three more networks to cover it.

And the Big East will have its hooks in practically every nook and cranny of that new-look NCAA bracket.

The NCAA selection committee released its newfangled, 68-team draw Sunday and included a whopping 11 teams from the deepest conference in the nation.

Leading the way for the Big East was Pittsburgh, seeded first in the Southeast even though it didn’t win a game in the conference’s postseason tournament.

“It has Hall of Fame coaches, great programs with storied traditions and heritage,” St. John’s coach Steve Lavin said of the Big East, a few minutes before his team became the 11th and final from the conference to have its name announced on the selection show. “It has athletic programs that understand the value of investing the dollars that are needed to run a top-flight program.”

Ohio State of the Big Ten was the top seed overall, with Kansas of the Big 12 next, while defending champion Duke aced out another Big East team, Notre Dame, for the fourth and final top seed. They’ll be among the favorites to be at the Final Four, in Houston on April 2 and 4.

The tournament got a slight facelift this year, including the addition of three more at-large teams that will open the tournament in what the NCAA is calling the “First Four.” Those games — UAB vs. Clemson and Southern Cal vs. Virginia Commonwealth — will take place Tuesday and Wednesday.

Those, along with every other game of the entire tournament, will be aired in their entirety on four networks. Before the start of the season, TBS, TNT and TruTV joined CBS in signing a new, 14-year TV contract worth $10.8 billion — the price to be paid to air the games that make up America’s biggest office pool.

Still, more teams and more money don’t solve every problem or erase every whiff of controversy.

As is always the case on Selection Sunday, there were plenty of head-scratchers — a list of teams that came out of nowhere to make it and other virtual shoo-ins that didn’t.

In the first category: Georgia, given a surprisingly high No. 10 seed despite losing twice to Alabama, a team that got left out. Virginia Commonwealth and UAB were considered surprises.

Among those snubbed were Virginia Tech, which has come close but missed for four straight years, and Colorado, which beat tournament teams Texas, Missouri once — and another one, Kansas State, three times.

In the East region, Ohio State will open against the winner of an opening-round game between 16th seeds Texas-San Antonio and Alabama State. No. 8 George Mason will play No. 9 Villanova. No. 4 Kentucky will play No. 13 Princeton and No. 5 West Virginia will play the winner of a First Four matchup between No. 12 seeds UAB and Clemson.

No. 2 North Carolina will play No. 15 Long Island and No. 7 Washington will play No. 10 Georgia, a bubble team. No. 3 Syracuse will play Larry Bird’s alma mater, No. 14 Indiana State and No. 6 Xavier will play No. 11 Marquette, one of four Big East teams in the East region.

In the West, Duke will start its journey near home in Charlotte, with a second-round game against No. 16 Hampton, while No. 8 Michigan will play No. 9 Tennessee. No. 5 Arizona will play No. 12 Memphis, the Conference USA champion, and No. 4 Texas plays No. 13 Oakland.

No. 2 San Diego State plays No. 15 Northern Colorado and No. 7 Temple meets No. 10 Penn State, which made the tournament despite 14 losses. Rounding out that part of the bracket, No. 3 Connecticut, the Big East tournament champion, plays No. 14 Bucknell and No. 6 Cincinnati plays No. 11 Missouri.

In the Southwest, No. 1 Kansas will open play against No. 16 Boston University and Lon Kruger will lead No. 8 UNLV against a team he used to coach, No. 9 Illinois. No. 5 Vanderbilt will play No. 12 Richmond and No. 4 Louisville will play No. 13 Morehead State.

Second-seeded Notre Dame will play 15th-seeded Akron and No. 7 Texas A&M faces No. 10 Florida State; No. 3 Purdue, winner of 10 of its last 12 games, will play the 14th-seeded St. Peter’s Peacocks, while No. 6 Georgetown will play the winner of a First Four matchup between 11th-seeded Southern Cal and Virginia Commonwealth.

In the Southeast, No. 1 Pittsburgh plays the winner of 16th-seeded UNC-Ashville and Arkansas-Little Rock and last year’s runner-up, No. 8 Butler, plays No. 9 Old Dominion. No. 5 Kansas State plays No. 12 Utah State and No. 4 Wisconsin plays No. 13 Belmont.

The second-seeded Florida Gators play No. 15 UC-Santa Barbara and No. 7 UCLA returns to the tournament to play No. 10 Michigan State. No. 3 Brigham Young plays No. 14 Wofford, while No. 11 Gonzaga plays No. 6 St. John’s — the 11th team from the Big East placed in the bracket.