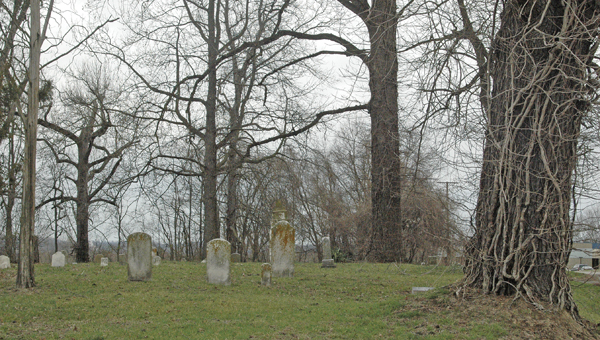 Newton Cemetery in Coal Grove had been nearly forgotten until village councilman, Nick Miller, and Coal Grove resident, Roy Carpenter, volunteered to maintain it a few years ago. Carpenter cuts grass and clears debris around the faded and sinking headstones. The Tribune/Michelle Goodman

COAL GROVE — Somehow Mary A. Mayne, born in Bristol, England, made her way to Lawrence County; we may never know why.

She only has one visitor to her resting place in Newton Cemetery in Coal Grove: Roy Carpenter.

Mary’s headstone, like many others in the nearly forgotten cemetery, is weatherworn, barely legible and lying flat on the ground. Most of the stones around hers can no longer be read at all.

Carpenter, 71, has spent the past three years tending to the cemetery. During the warmer months, he mows the grass and clears debris and litter. Although a few graves have been visited recently, marked by flowers or an American flag, the rest are resigned to Carpenter’s company.

The cemetery, once apart of Woodland Cemetery, had been overgrown with grass, weeds and broken branches when Coal Grove Village Councilman, Nick Miller, decided to investigate who actually had ownership of the property.

“No one wanted to take responsibility for it,” Miller said. He called several governing bodies until finally the Department of Commerce said the cemetery had no private owner, leaving the right to maintain it up to the village. “It’s just a shame to see a cemetery right beside our government hall not being taken care of. We’re doing the best we can, and all on a volunteer basis.”

Miller said the village was operating on a minimum of staffing and couldn’t dedicate any employee’s time there.

Miller and his friend, Carpenter, volunteered to clean Newton Cemetery.

“I started out with it but Roy did the bulk of the work,” Miller said. “He’s done a nice job of keeping up with it.”

“I don’t have to be anywhere. Time is not an object,” Carpenter said. “I’ve got more time now.”

Carpenter uses an old lawn mower to maneuver the fallen walnuts and roots sticking out of the ground. He uses all his own equipment to care for the cemetery, save for a few gallons of gas donated by the village every now and then. He tosses branches into the heavy brush that borders the cemetery, but said he suspects that other graves may be scattered through out.

The markers of G.C. and G.B. Arbaugh are lying under a large broken branch, something Carpenter can’t move on his own.

“I’ve got a project here,” he said, seemingly overwhelmed.

Newton Cemetery, across from Coal Grove Village Hall and Tri-State Industries, is a hauntingly lonely place. Many of the headstones are broken and most are sinking into the soft ground.

“There’s no family to worry about it,” Carpenter said. “It’s sad.”

Little is known about the history of the cemetery. It is unclear how many people were buried there, but most of the burials occurred in the 1800s and early 1900s. There are even Civil War Union veterans, like James Litteral, buried there. Their graves marked with an empty Grand Army of the Republic flag holder.

“I think, if you look at the village of Coal Grove, to me, it’s one of the most historic sites in the village,” Miller said. “There’s a lot of history there.”

Miller said the village would welcome anyone who wanted to help the maintaining of the cemetery. If they would come to a council meeting, they could learn what needs to be done and what isn’t allowed. The council meets at 7 p.m. at the townhouse every first and third Tuesday of the month.

“Roy really needs to be commended for his work,” Miller said.

Carpenter disagreed, saying, “I’m not looking for a pat on the back.”