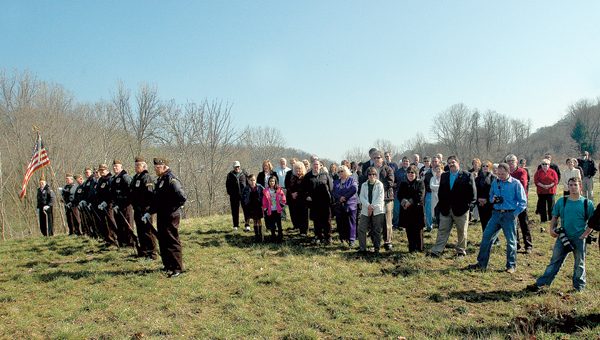 It was a way to say “thank you” a well-known Lawrence County community activist. 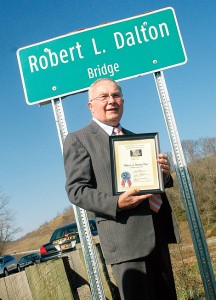 Local architect, Robert Dalton was honored with a bridge dedication in his name for his decades work in lobbying for the Chesapeake Bypass.

As a member of the Greater Lawrence County Chamber of Commerce’s transportation committee, Dalton was instrumental in working to promote the Chesapeake Bypass.

“You’ve given, given, given of yourself and I think people don’t always think about that,” Bill Dingus, director of the Chamber, said. “They see people like myself or Ralph Kline or Jason (Stephens) but you know, we’re on the clock. We’re doing this during our regular workday where Bob, he would take off during his work day and then work at night to make up for the time he was gone.”

The bridge that now bears his name crosses Paddy Creek on the Proctorville section of the bypass. Besides naming a bridge for Dalton, Lawrence County officials also declared Saturday Robert Dalton Day in the county.

Kline, the assistant director of the Ironton-Lawrence County, served with Dalton on the Chamber’s transportation committee. The chamber’s annual trip to the statehouse started as a way of educating state officials about the need for the bypass, Kline said.

“It’s not just the county, it’s the whole Tri-State,” he said after the ceremony. “Imagine Columbus without an outer belt. It’s a key part of the Tri-State transportation system.”

Twenty million dollars has been allocated from the state for property acquisitions for the next phase of the bypass project, which will be between the Proctorville and Chesapeake portions.

The Proctorville portion of the bypass has been open for about five years. As Lawrence County Auditor Jason Stephens pointed out, traffic there looked very different before that, especially for one week during the year.

Stephens asked the crowd of community officials and Daltons friends and family. “Anybody remember the fair traffic? Anybody who has sat in that traffic for years and years and years or who avoided this or would leave town (during the fair) or just can imagine how congested our area was can thank bob Dalton for making our commute a lot easier and for the growth that’s going to come from this.”

His wife, Joyce Ann Dalton, said her husband is deserving of the honor.

“He’s worked hard,” she said. “(There were) many trips to Columbus and lots of time away from his family. He does it with grace. He’s a very good person.”