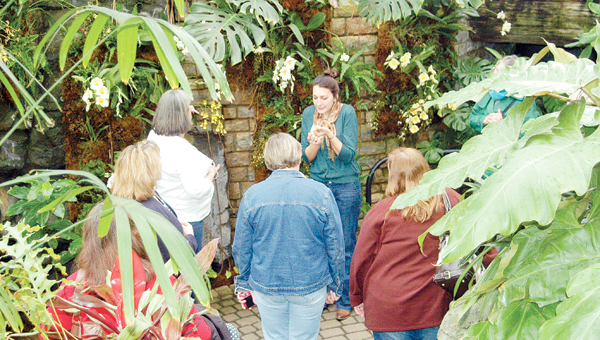 Tracey Barnes, a horticulturist at the Franklin Conservatory, points out features of the rain forest exhibit during a recent Ironton In Bloom tour.

COLUMBUS — They were day trippers with a single goal in mind — just to see something beautiful. And the recent trip to the Franklin Conservatory in Columbus, sponsored by Ironton In Bloom, fit the bill for the 28 Saturday travelers who signed on.

Also part of the trip was an afternoon self-guided tour of the annual House and Garden show at the Ohio State Fairgrounds.

Through April 3 the main show at the conservatory, noted for its glass-domed palm house built in 1895, was the orchid forest where 1,600 of the tropical beauties filled one of the display rooms.

Guide for the tour was Tracey Barnes, horticulturist and volunteer coordinator for the conservatory, who explained how the variety of orchids comes from cross pollination between genuses.

“It would be like hummingbirds crossing with eagles,” she said. “But orchids have that ability. Each orchid has a different color, size, shape and fragrance. And the orchid is on every continent except Antarctica.”

Growing in bunches overflowing from planters were yellow cymbidiums, most often used in corsages, and mauve phalaenopsis.

Special conditions are required to keep orchids healthy and plentiful, Barnes said. The delicate flowers must have humidity and bright light. However, a home gardener can duplicate those conditions with a little care.

Putting them in the same room as a dishwasher or in bathroom where it is humid can create a micro climate. A spray bottle can provided needed mist if done twice a day.

From the orchid room the tour continued to the rainforest where the banshee-like screeches of Mack, the macaw, chilled to the bone. Next was the desert room with its selection of cactus including the carrion flower.

“When it is in bloom, it smells like road kill,” Barnes said, who explained that the spines of a cactus are modified leaves.

“It is another form of adaptation,” she said. “The spines stick out and if there is any mist and humidity, it will settle on them and drop down on the ground to the roots.”

Throughout the conservatory is the collection of hand-blown glass sculpture created by Dale Chihuly. One of the largest pieces is a 3,000-pound glass ceiling designed to resemble a look into the sea.

Even conservatories like Franklin with trained horticulturists on staff still suffer from the same pest plagues as the average gardeners as Barnes showed a crop of aphids trying to attack a plant.

“Aphids can reproduce without the male and they give birth to live aphids that are already pregnant,” she said.

However, hand soap, as long as it is not anti-bacterial, diluted with water is an effective spray.

The orchid show ends on April 3, but on April 9, from 8:30 a.m. to 5 p.m. one can take a piece of the orchid forest home as phalaenopsis, cymbidiums and intergeneric oncidiums will be on sale starting at $4.

Starting this week through September is the annual Blooms and Butterflies show where hundreds of chrysalis are on display in the a special glass emergence center. Newly emerged butterflies are released twice daily at 1 p.m. and 3 p.m. into the Pacific Island Water Garden as a staff member details the short, but beautiful life of the butterfly.

Making a move with Fido

Dogs are creatures of habit, so any big change in their life has the potential to shake them up. It... read more