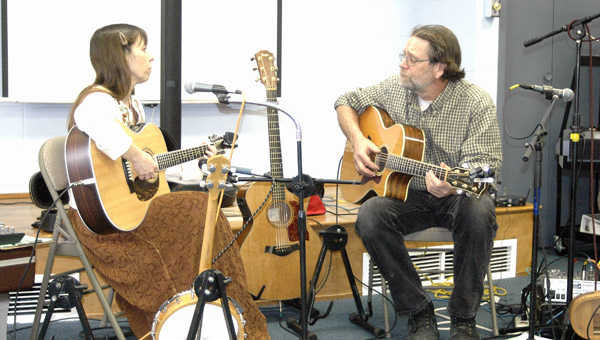 Teresa Morrison and Dan Moorefield team up to present the kind of music famed satirist Mark Twain would have enjoyed at the Briggs Lawrence Library. The Tribune/Benita Heath

He was known as the writer whose pen was like a flame piercing the hypocrisies of society. But there was a softer side to Mark Twain, or at least a more melodic one.

And that is what Upriver Music demonstrated as they showed off the kinds of music the master storyteller and satirist would have tapped his foot to to an audience at Briggs Lawrence Library in Ironton.

The duo, based out of Shreve, was in the Tri-State presenting recitals of Celtic and Appalachian music as part of a 13-city tour.

“He was America’s first novelist, writing from an American perspective,” Dan Moorefield, who makes up one-half of Upriver Music. “He had an incredible imagination, a love of words and he attracted stories.”

Moorefield stumbled onto Twain’s works as a young boy and was riveted by the escapades of Tom Sawyer.

“I was immediately aware he had a lot more imagination and I had a lot of catching up to do,” he said.

Twain grew up in a musical home and played — and toted around with him – a used Martin guitar, that bore the price tag in 1835 of $10.

Moorefield was joined on stage by Teresa Morrison and the two did instrumental duets of much of what is now called old-time Appalachian music, but whose roots come from Celtic tunes.

One of the most familiar was “When Johnny Comes Marchin’ Home,” known in this country as a marching song created for Union Army recruitment. However, that Civil War tune actually came from an Irish dirge.

A contemporary of Twain was Stephen Collins Foster, who was a successful writer of popular songs of that era.

“All the wealthy class had a piano and all of a sudden popular music arrived,” Moorefield said. “Mr. Foster was on the vanguard of that.”

And Twain paid tribute to Foster’s popularity as a songwriter by having one of characters in “The Adventures of Tom Sawyer,” whistle the Foster tune, “Buffalo Girls.”

But it was the fast-paced string instruments that captured Twain’s imagination.

“The piano was for lovesick girls,” Morrison quoted Twain as saying. “Give me the banjo.”

Let there be light