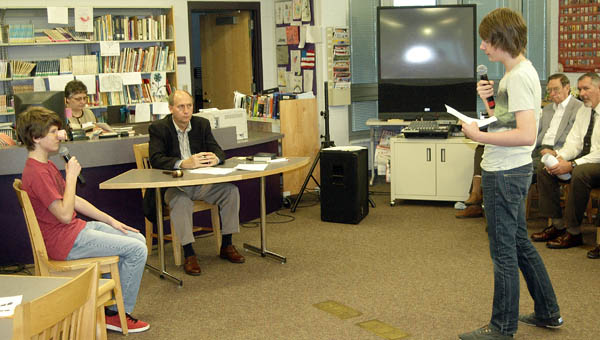 Eli Johnson, who portrayed “Squealer the Pig,” is cross examined by Ben Myers, a defense attorney, during the mock trial Wednesday.

CHESAPEAKE — It’s a chance to see how quickly she can think on her feet. That’s what Caitlyn Theisen enjoys about playing lawyer in the annual mock trials at Chesapeake Middle School.

This was the second year for Theisen, an eighth grade talented and gifted student, to try out her debating skills. She was supporting the plaintiff’s side Wednesday morning as the TAG class took on George Orwell’s “Animal Farm.”

“I wasn’t that knowledgeable about the law and through this I have learned about it,” she said. So much so Theisen is considering a career as an attorney.

“I like the way the trial process is,” she said. “It gives me a chance to argue and put my thoughts together really quickly.”

Orwell’s novella is a satire on the Russian revolution, questioning if a society of equality can actually be created. In the court case, the pigs, who have taken over the leadership roles, are being sued for destroying the communistic balance of power the animals had created.

Written around the time of the end of World War II, the book attacks Stalin’s version of communism, the then new social order in Russia.

“The book is based on a loose interpretation of the Russian revolution,” Terry Montgomery, TAG teacher, said. “At the animal farm there are seven rules of animalism and two of the leaders, representing Lenin and Stalin, did not follow their own rules.”

In “Animal Farm” the pigs take on the role of the leaders with Napoleon the pig symbolizing Stalin with his sidekick Squealer.

“The pigs are the elite even though the rule says all animals are equal,” Montgomery said. “The horses, goats, all the rest of the animals are suing the pigs. They feel they have violated the rights of the animals, where all are equal.”

The Ohio Center for Law-Related Education is responsible for turning the Orwell’s book into a court case for use in schools.

“I had never done ‘Animal Farm’ before,” Montgomery said. “This particular class is really sharp and they tend to get innuendoes. I felt this would be a good time to introduce the book. They were also learning about Russian history. They were kind of evaluating the idea of communism, the true idea of communism and how it actually played out.”

The Chesapeake TAG students put on a mock trial each spring, writing their own opening statements, closing arguments and witness depositions. Parents and other community members take on the role of jury.

Defending Napoleon the pig and his cohort was Ben Myers, another TAG student.

“We learn how real attorneys do this,” Myers said. “There is lots and lots of planning. And you have to come up with your questions right away.”