Buckeyes unbeaten against UK in tournament 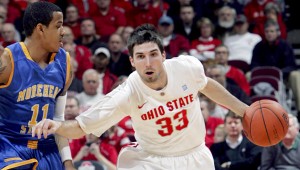 NEWARK, N.J. — Kentucky prides itself on its history, and rightfully so. The Wildcats have done just about everything there is to do in college basketball.

Whether you’re talking about their 51 NCAA tournament appearances, 13 Final Fours or seven national championships, few programs rival the bluebloods from the Bluegrass State.

One thing they’ve never done, though, is beat Ohio State when it counts.

“No one told me that,” freshman guard Brandon Knight said, upon learning his Wildcats will be trying to end a 0-for-5 NCAA tournament drought against the top-seeded Buckeyes in the East Regional semifinals Friday night.

“You’re the first person to tell me that,” Knight said. “I mean, there’s a lot of things that haven’t been done, but some crazy things happen in the tournament. I know Ohio State has a lot of great players, but that stat doesn’t really mean that much to me.”

That’s because the Wildcats revel in their past, they just don’t live in it.

Not a single player on their roster was even alive the last time these two teams met in the tournament, when Eddie Sutton’s bunch lost in the first round in 1987. Even current coach John Calipari was just a youngster the time before that, when Dave Sorenson’s jumper in the final seconds lifted the Buckeyes to an 82-81 victory and into the 1968 Final Four.

The Wildcats also lost to Ohio State in 1945, and again in 1961 and ’62. In fact, the only program to beat them more times in the NCAA tournament is Marquette, which coincidentally plays North Carolina in the other regional semifinal at the Prudential Center.

Talk about a rough path to the Final Four in Houston.

“As we told our guys, every round you advance in the NCAA tournament, your opponent gets tougher,” Ohio State coach Thad Matta said. “It is definitely the case here.”

The Wildcats have one of the youngest teams in the country, but it’s also one of the most talented, with a point guard in Knight who is finally learning to execute Calipari’s unique dribble-drive offense. His only basket in the first round against Princeton was the game-winner, but he followed that up with a career-high 30 points against West Virginia.

He gets plenty of help from fellow freshmen Doron Lamb and Terrence Jones, too.

Lamb, one of the nation’s best perimeter shooters, set the Kentucky single-game freshman scoring record with 32 points against Winthrop. Jones bettered that with 35 against Auburn.

“They’re a great team,” Ohio State’s David Lighty said. “I mean, they’re athletic, they get out and run, they push the pace. They have bigs, they have wings, and they have a guard who can pretty much do it all. If we don’t come ready to play, it’s going to be a long night for us.”

It could just as easily be a long night for the Wildcats.

Although they have youthful exuberance on their side, the veteran Buckeyes counter with sagely wisdom. If they choose to run up and down the floor, Ohio State will slow down into a half-court offense and dump the ball inside to 6-foot-9 freshman Jared Sullinger, who is good for a double-double just about every time he steps on the floor.

Lighty is all that’s left from the so-called “Thad Five” — the recruiting class of Greg Oden, Mike Conley Jr., Daequan Cook and Othello Hunter that is long gone. But his experience, along with that of fellow seniors Jon Diebler and Dallas Lauderdale, is a big reason why Ohio State has been so successful this season.

And a big reason Ohio State is favored to win it all.

“At this point, it’s just two teams going at each other,” Calipari said. “None of that matters in this stuff, and that’s why an inexperienced team like mine, it’s hard to predict how they’re going to come out and do with the lights like they are.”

Lights that couldn’t be much brighter.

Calipari has come to understand that there is a certain mystique surrounding Kentucky, the kind built slowly over time, established by coaches such as Adolph Rupp and Joe B. Hall.

It comes with winning marquee games, against teams such as Ohio State.

Something that’s never happened before in the NCAA tournament.

“It’s different, different than any other program,” Calipari said. “I know there are programs that are connected to their state, but none like this. They breathe with every shot — inhale, exhale, you make it, exhale, you miss it. It’s just how they are.

“I’m humbled to be able to coach there and have this opportunity to be a part of it.”

ANAHEIM, Calif. (AP) — Derrick Williams scored a career-high 32 points and his teammates dominated Duke in the second half... read more