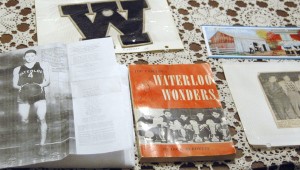 Sometimes it appears on the surface that Richard Newman has goose bumps, but in reality they are just miniature basketballs.

Okay, maybe that’s an exaggeration, but it wouldn’t surprise anyone in the Newman family. It seems that basketball is in his blood.

Newman loves basketball season, especially tournament time. And it’s understandable. His uncle and cousin were two of the most well-known tournament stars to ever play in Lawrence County.

Newman’s uncle was the late Orlyn Roberts and his second cousin was the late Wyman Roberts, both starting guards for the famed 1934 and 1935 state Class B champion Waterloo Wonders.

“I love basketball. I like high school, but I don’t go very often any more. I went to games with Noel Burcham a lot. Now I listen on the radio and I love (to watch) college basketball. It was in the blood,” said Newman.

Not only does Newman have famous basketball relatives, his family has quite a basketball background.

“The Roberts family was a talented family. My brother Raymond was an exceptional player. My mom could play, too,” said Newman.

Newman played for the Wonders from 1957-60, one of their final teams before consolidation created Symmes Valley High School in 1962.

But being part of the Roberts’ family and its basketball history is what Newman is most associated.

“I talked to Orlyn all the time. We went rabbit hunting a lot. He could shoot (a gun) as well as anyone I’ve hunted with. He played music. He was a great softball player. He was a really good athlete,” said Newman.

The 68-year-old Newman said Orlyn talked basketball and gave him some tips, but he said it wasn’t limited to basketball. In fact, he remembers more about other conversations than basketball.

During his high school career, Newman played in the Lawrence County tournament in the old Ironton High School gym. He has a lot of fond memories of those day, but one incident stands out.

“(Orlyn) watched me some games when I played in high school,” said Newman. “He went to the country tournament with Wyman and they had a picture in (The Ironton Tribune) and I was in the middle between them and we were shaking hands.”

A mini-family reunion held at a basketball game. What else would you expect?