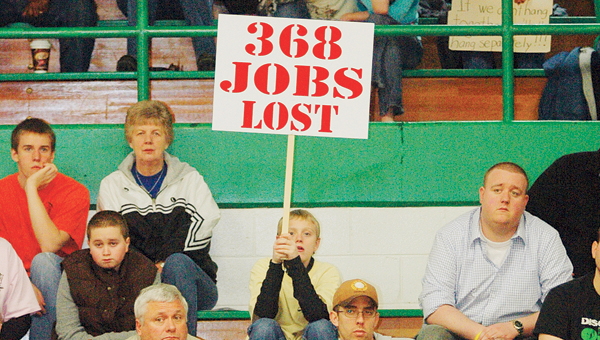 Justin Salyers, of Wheelersburg, hoists a sign in the air during a rally to protest the closing of the Ohio River Valley Juvenile Correctional Facility, located in Franklin Furnace, Saturday at Green High School. THE TRIBUNE/JESSICA ST JAMES

FRANKLIN FURNACE — The cause was secular but the fervor was pure camp meeting as the bleachers at Green High School were filled with a community fighting to keep jobs at home.

The proposed closure of the Ohio River Valley Juvenile Correctional Facility brought out the crowds Saturday afternoon as politicians and average Joes spoke out against the prospect. 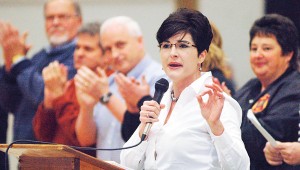 Katrina Keith, with the City of Ironton, speaks to supporters at the ORVJCF rally Saturday afternoon as she shows her support for keeping the facility open. THE TRIBUNE/JESSICA ST JAMES

And among the leading evangelists was Katrina Keith, a city of Ironton employee, whose husband is among the 300 plus who could lose their jobs.

Over and over Keith’s words brought the audience to its feet.

“This is Southern Ohio. We are not going anywhere,” she said. “It is about people, understanding who people really are.”

When the closure was first announced more than a week ago, it happened simultaneously with the release of Gov. John Kasich’s budget to attack an $8 billion shortfall.

Kasich’s budget calls for a $41 million reduction from the Department of Youth Services, which oversees the facility. Closing the Franklin Furnace center would save the DYS a little more than $25 million.

And it was Kasich who received one of the hardest blasts when ORV employee Andy Derifield called the governor “a callous businessman … who is hell bent to convince the private sector that public employees are bad. (The closure) will not save money.”

Other cost savings at DYS would come from the elimination of seven positions with the parole department, four of which are currently vacant, according to Andrea Kruse, spokesperson with DYS.

“Funding to Central Office Administration will also be reduced, resulting in the loss of 21 positions, seven of which are vacant, and a reduction in contracts, travel, supplies and equipment,” Kruse said. “Within the executive budget there is a small reduction to the Community Corrections Facilities’ funding. In addition the Franklin County Community-based Treatment Center program will end effective June 30.”

That means that the cost for a youth at Ohio River on that day was $579. That compares with the other facilities with Cuyahoga at $364 per youth a day; Circleville at $434; Indian River at $303 and Scioto at $522. “Because the youth population is in flux, we would look at a per diem on an annual basis,” Kruse said. “However, if you are just looking at the snapshot of one day, right now the Ohio River Valley has one of our lowest youth populations and has nearly the highest operating budget.”

A team in place is coming up with a plan to determine where the youth at Ohio River Valley will be transferred, according to a DYS spokesperson.

As far as number of employees, the Franklin Furnace facility has the largest staff — 333 full-time employees and an additional 30 or 40 part-time and interim employees — although it is ranked fourth as to number of youth served. The next largest is Scioto with 327 on staff followed by Cuyahoga Hills with 305 employees, Indian River with 270 and Circleville with 231 on staff.

“For bargaining unit employees bumping is based on seniority and for exempt employees, bumping is based on retention points,” she said. “The process of determining who is displaced, to what location and who is laid off will begin in June. The final displacement list will be released in August.”

There is no severance package for state employees, but laid off employees can get unemployment, Kruse said.

However, according to another DYS spokesperson closing the Franklin Furnace center is as much a matter of meeting a stipulation agreement with the federal court that arose from the lawsuit of SH versus Strickrath that was filed in 2007 and settled the next spring.

Named for a youth and a former DYS director Tom Stickrath, it was a class action suit that determined that when youth are confined they have the right to see their family on a regular basis.

“It requires our agency of increasing efforts for family engagement for the youth in our custody,” Kim Parsell, public information officer for DYS, said. “This has been extremely difficult because of Ohio River Valley’s location. Franklin Furnace is the farthest facility from most youth’s family. Most youth’s families are in Cleveland.”

Also the number of youth served across the state has been reduced from 1,800 in 2007 to 720 today. The reason for the reduction is the use of community-based alternative programs for lower-to-middle risk youth. Such programs include Reclaim Ohio, where juvenile courts are encouraged to come up with community-based options for these youth.

However the sentiment at the rally was that the center is providing a much needed service to the state. And supporters say they won’t stop the fight, passing out petitions throughout the program whose destination will be the statehouse.

“Keep your head up,” Keith extolled the audience. “When one door closes, another pops open. But I don’t believe this door is closed.”

IRONTON — As part of its regular maintenance program, the Ironton-Russell Bridge will undergo a series of inspections in the... read more