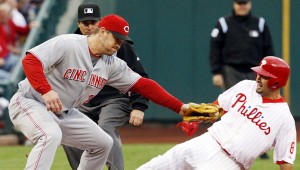 CINCINNATI — Dusty Baker had a lot to think about on his flight from California to Arizona to open spring training, managing a Cincinnati team coming off a breakthrough season.

The Reds broke their long drought of misery last season, pulling off their first winning season in 10 years and their first playoff appearance in 15 years. Their young lineup won the NL Central and was swept by Philadelphia in the playoffs, a 3-0 blanking that that felt more like a starting point than a disappointment.

As his jet cruised into Arizona, Baker had a lot of things going through his mind.

“You wonder when the plane comes back home and the smoke clears, where are you going to be?” Baker said. “It’s a long way and a lot of things can happen, a lot of changes. We think that a lot of positive things are about to happen.”

Didn’t take long to get the reminder that things can change fast.

Opening day starter Edinson Volquez had visa problems that limited him at the start of spring training. Johnny Cueto developed shoulder problems. So did Homer Bailey. Bronson Arroyo became sick and never improved, forcing him to get tested for a fungal lung disease. Turns out, he’s got mononucleosis.

Just like that, the top four spots in the rotation were no longer sure things with opening day approaching.

It was a pretty unsettling beginning, to say the least.

“Everybody is doom and gloom,” Baker said. “I’m not like that. I was taught you try to find a solution vs. the sky is falling and chicken little. You try to figure out a solution.”

Their solution is to use their depth — something missing in years past — to hold their ground in a very forgiving division, one the Reds dominated last year to get that long-awaited championship.

Cincinnati went only 30-41 against teams with a record of .500 or better last season. They beat up on losing teams, going 61-30 against them. They also dominated their division, going 49-30 while winning their season series against the Cubs, Brewers, Astros and Pirates. Only the Cardinals won more than they lost against Cincinnati.

The Reds kept their roster virtually intact, thinking it’s a combination just getting started on a long run of winning.

So, the rough spring didn’t change the outlook.

The Reds think their depth can get them through the injuries without major problem. Plus, the rest of the division also had a tough time getting ready for the season.

The Cardinals lost top starter Adam Wainwright to injury and failed to sign Albert Pujols to a long-term deal. New Brewers starter Zack Greinke cracked a rib during an offseason pickup basketball game. The Cubs had another dugout spat, this one involving pitcher Carlos Silva, who then failed to make the team.

Baker thinks the Reds’ young pitching staff can get through the first few weeks. Cueto and Bailey are expected to come off the disabled list before the end of April. A group of young pitchers including Mike Leake, Travis Wood, Sam LeCure and Matt Maloney did well during the pennant-race pressure last season.

“We have depth, especially with young pitching,” Baker said. “We have a lot of other guys knocking on the door. We didn’t think we’d have to use our depth so soon, but we’re glad to have it.”

The bullpen lost only left-handed setup specialist Arthur Rhodes, who is replaced by left-hander Aroldis Chapman. The Cuban defector was called up at the end of last season and made a scintillating debut, hitting 105 mph with his fastball while getting accustomed to his new country and his new league. He’s more relaxed heading into his second year of professional baseball.

“I think this year is going to be a lot better for me,” Chapman said, through a translator.

The everyday lineup has only one change, with Paul Janish moving from backup to starter at shortstop. The Reds expect more out of Janish and young outfielders Drew Stubbs and Jay Bruce, who struggled offensively in the first half of last season.

First baseman Joey Votto is convinced he can improve upon his National League MVP season of .324, 37 homers, 113 RBIs.

“I think I’m realistic,” Votto said. “I’d like to be a better defensive player. As far as a hitter, I’d like to be more efficient. I feel like I wasted a lot of at-bats last year.”

The Reds had only a handful of players with postseason experience last year when they pulled away from St. Louis for the division title. Baker thinks that experience should help all of them as they try to make it two in a row.

“The hardest part is doing it the first time, I think, on anything,” Baker said. “You think you can do it. You say, ’Oh, I know I can do it.’ But until you do it, you don’t know if you can do it or not.

By JIM WALKER Tribune Sports Editor So what does Tanner Riley do for an encore? In the first game of... read more