Paula’s a ‘mane’ attraction for 30 years

When Paula Bellomy first became a hairdresser, she had no idea her career would last as long as it has. In fact, she recalls talking with her now late husband, Bob, who suggested she work for two years and then quit.

“Now here we are 35 years later,” said Bellomy, who owns Paula’s Beauty Shop/ Tone & Tan in Ironton. This past week the 37-year hairdresser celebrated 30 years of owning a business.

“It’s really good,” a tearful Bellomy said of her success. “There’s a lot we’ve been through in 30 years. A lot of customers lost, a lot of family members, and a lot of different customers. It’s been good.”

Paula added that through the good and the bad over the years, she has not regretted anything.

Bellomy knew she wanted to become a hairdresser at a young age. 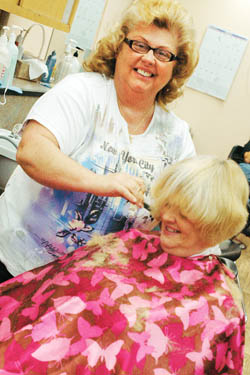 Paula Bellomy, owner of Paula’s Beauty Shop, Inc., recently celebrated 30 years in Ironton. The beauty shop started out in west Ironton at Third and Elm streets. It has also been on Center Street and then Vernon Street before she bought her current building at 107 S. Second St., in 1999. THE TRIBUNE JESSICA ST JAMES

The Ironton native graduated from Ironton Beauty School in 1974 and worked in a few beauty shops before starting her own business in 1981. The beauty shop started out in west Ironton at Third and Elm streets. It has also been on Center Street and then Vernon Street before she bought her current building at 107 S. Second St., in 1999.

Over the years, there have been too many memories to count. For instance, when hairdresser friend Lou Pyles was the maid of honor at her wedding. Bellomy later served as matron of honor at Pyles’ wedding.

And there are stories she won’t forget. Like the time a man with a knife tried to rob her and her customers. He walked away bruised and with only six dollars to show for it.

It was about 5 p.m. one day. Bellomy had just come in to work at 4 p.m., and her associate had left at the same time. The $6 was from the only haircut she had done so far that day.

Frustrated, the man demanded money from one of the customers, who took Bellomy’s broom and beat him with it.

“He goes outside and looks back in like, ‘What just happened?’” Bellomy said.

It was only after the incident when she was giving a report to the police that the severity of the situation occurred to her.

Bellomy says the best part of the last 30 years has been getting to know the people.

“Some are almost like family,” she said of her customers. “You’ve done their hair for almost 30 years.

“I’ve got one guy that I think I started cutting his hair at 12 and he’s like 40 now. They still stick with you. You have some that don’t, but for the most part if they were a kid here they’re still an adult here.”

Fellow hairdresser Helen McGlone, has worked with Bellomy for the last 19 years. She agreed the customers have become more like friends and family members.

“They’re not just customers,” McGlone said. “When they hurt, you hurt.”

Long-time customer Donna Greco echoed that sentiment. She’s been a customer for the past 13 years.

“She does it fast and she’s kind and a good friend,” Greco said. “We talk about a lot of the gossip, the kids and all that stuff.”

Bellomy has enjoyed the last 30 years. She said she’s looking forward to retirement or at least slowing down in the next few years.

“I would like to sell my shop to someone who’s younger and who wants to put in another 30 years,” Bellomy said.